Executive CouncilOffice of the Governor

Office of the Governor

Profile of the Governor 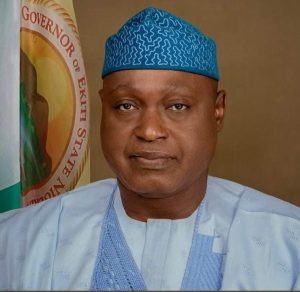 Hon. Abiodun Abayomi Oyebanji was born on December 21, 1967, in Ikogosi-Ekiti, and  served as the Secretary to the Government of Ekiti State. He began his academic journey at Baptist Primary School, Ikogosi-Ekiti.

He attended Awo Community High School before transferring to C.A.C. Grammar School, Efon-Alaaye, Ekiti State in 1979, and later attended the Federal School of Arts and Science, Ondo State, and the District Commercial Secondary School, Aramoko-Ekiti from 1983 to 1985.

He acquired a Bachelor of Science (BSc.) degree in Political Science from the Ondo State University (now Ekiti State University, Ado-Ekiti) in 1989 and continued his quest for honours at the University of Ibadan, Oyo State in 1992 where he bagged his Masters’ Degree (M.Sc) in Political Science (International Relations & Strategic Studies). Oyebanji started his professional career as a Lecturer at the Department of Political Science, University of Ado Ekiti, where he worked for four years (1993 – 1997) and later proceeded to work as Manager, Treasury, and Financial Services at the defunct Omega Bank Plc (now Heritage Bank) till May 1999. Oyebanji is engaged in the Agribusiness and is the chairman of Con Dois Farms Ltd.
As a successful businessman and a devoted public servant, Abiodun Oyebanji has earned many awards including the Distinguished Alumnus Award by the Alumni Association of the then Ondo State University, Ado-Ekiti, and the Certificate of Excellence awarded by the National Association of Political Science Students (NAPSS), Ondo State University, Ado-Ekiti. Writing the history of politics and governance in Ekiti State is incomplete without mentioning the critical contributions of Abiodun Oyebanji.

MY VISION AND MISSION
“My vision is for Ekiti State to be a land of prosperity, opportunity, peace and progress. A land in which transformed people and communities can reap the fruits of their labour in dignity, good health and safety. A land of honour where integrity matters.

The following are the various sections in the department: