Executive CouncilOffice of the Deputy Governor

Office of the Deputy Governor

Profile of the Deputy Governor 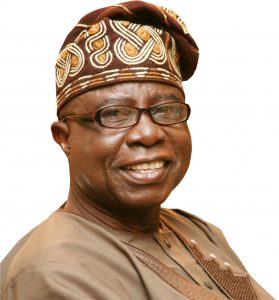 Otunba Adebisi Adegboyega Egbeyemi was born on 8th May, 1944 in Ado-Ekiti to the family of Late Pa. Michael Egbeyemi Alade and Late Madam Tinubu Egbeyemi. He attended St. Saviour’s Primary School, Ado-Ektiti from 1952 to 1957; Holy Trinity Anglican School Ilawe-Ekiti (1958) and Baptist School, Ado-Ekiti (1959). He later attended Harding Memorial Secondary Modern School where he obtained his Modern School Certificate in 1962. In 1963 he learnt typing and shorthand at a private institute in Ado-Ekiti.

He studied privately while he was a Laboratory Assistant at Ekiti Parapo College, Ido-Ekiti, 1965, and when he was a Bursar at Notre Dame Grammar School Usi-Ekiti from 1969 to 1972 during which he passed his West Africa School Certificate Examination as a private student and both G.C.E. ‘O’Level and Advanced Level Examinations. He later proceeded to the University of Lagos College of Education where he read Biology and Physical Education and passed with Distinction in Physical Education. He taught Biology briefly at St. Mary’s School, Ikole-Ekiti in 1975 before he was transferred to the new Divisional Teachers’ College Oye-Ekiti as the Pioneer Physical Education Tutor between 1975-1977. He read Law at the University of Ife (Now Obafemi Awolowo University) from 1977-1980 and was at the Nigerian Law School Victoria Island, Lagos between 1980-1981 where he obtained his Barrister at Law Certificate and was called to the Bar in 1981 as a Solicitor and Advocate of the Supreme Court of Nigeria .

Otunba Bisi Egeyemi right from his youth has always been a leader. He was Health Prefect in his Primary School and at the Modern Secondary School in 1962. He was President of the Physical Education Students Association of the University of Lagos College of Education, Akoka Lagos (1974-1975). He was President of the Law Students Association, University of Ife 1978-1979 session. He is married to Chief (Mrs.) Funke Egbeyemi. They are blessed with children.

To ensure that policies and programmes of the State Government are adequately implemented and attained for the overall transformation of Ekiti State.

To make Ekiti state a reference point for good governance in the country through effective and efficient service delivery to the people of the State.