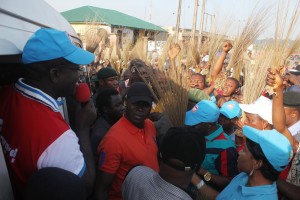 Ekiti State Governor, Dr. Kayode Fayemi (Left); addressing a group of crowd that gathered to welcome him to Ilawe-Ekiti, during the May Edition of the Monthly environmental Sanitation.

The May edition of the monthly environmental sanitation exercise in Ekiti South West Local Government of the State  was on Saturday turned into a political campaign for the incumbent Governor and candidate of the All Progressives Congress, Dr Kayode Fayemi.

Governor Fayemi who was in Ilawe, Igbaraodo and Ogotun to monitor the monthly exercise and inspecting some areas affected by gully erosion, was received by hundreds of residents in the areas with brooms in their hands, shouting APC slogan.

Within minutes of the Governor’s arrival at Okebedo Street, Ilawe the area was besieged  by a crowd of appreciative citizens who hailed the Governor’s developmental strides in the state and the intervention in the erosion problem in the town. The crowd followed the Governor throughout the inspection of the erosion-prone areas.

The Governor had urged the people to go back to their various houses to observe the monthly sanitation, saying that he was not in the town for electioneering campaign, but the people insisted that they had cleaned their surroundings.

The crowd sang various songs of solidarity buttressing their support for the Governor’s re-election come June 21.

At Igbaraodo Ekiti, Fayemi was received in a similar manner as both old and young who were in their homes trooped out to greet the governor pledging their support for him.

It is recalled that opinion polls on the coming guber election are now turning in favour of Fayemi whom many of the people have commended for his honesty and panache.

Reacting to the people’s gesture, Governor Fayemi in an interview with journalists said the gesture is a testament that the people are not only committed to having a cleaner environment but are also interested in associating with the good works which the APC, whose party symbol is the broom, is doing in the State.

“The people came out and respected the environmental sanitation order, and I could see that many of the places we visited have been cleaned up particularly in Ekiti South west local government which was the focus of our inspection today. It was more than an environmental sanitation. It was also a form of campaign because people came out even though they didn’t know I was coming and the joy and excitement in the faces of the people who came out was quite heart-warming. So for me, it was a double celebration. First it was for a clean environment. You know that the broom is the symbol of our party, a clean environment is a sine qua non to a productive and developed environment. That’s what the people have demonstrated and we re pleased with that”, he said.

Fayemi said the state government has decided to embark on remedial solution so as to protect the citizens from being at the losing end.

“The gully at Ilawe is not new to us. It is part of the works that the ministry of Environment has compiled and which the federal government ought to have taken responsibility for as part of their ecological projects that we have in the state. But we re taking remedial action because we can’t wait forever for federal government to respond to our requests if they re not responding, it will be irresponsible on our part to just leave it the way it is. The remedial step is to reduce the threat of the gully to the people living in the area”, the governor said.

Also speaking, the State Commissioner for Environment, Dr Eniola Ajayi commended the people for their compliance with the sanitation exercise, saying that a clean environment promotes healthy living.

She added that the solidarity shown the governor during the sanitation exercise is a sign that the people want Fayemi to continue to sanitize the State till it becomes the envy of all.