NewsJakande Will Continue To Live In The Hearts Of The People – Gov. Fayemi 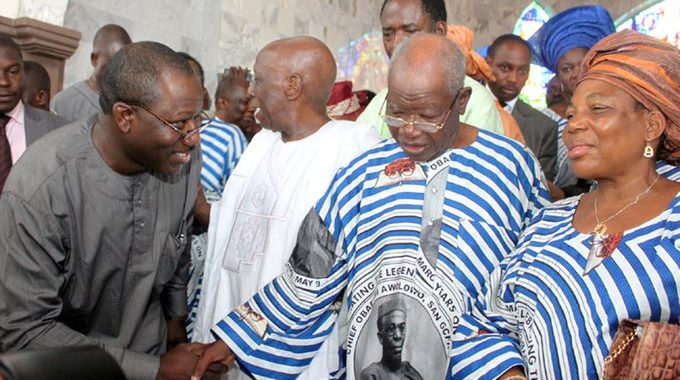 Jakande Will Continue To Live In The Hearts Of The People – Gov. Fayemi

The Governor of Ekiti State, Dr. Kayode Fayemi, has expressed his condolences on the death of the first elected Governor of Lagos State, Alhaji Lateef Kayode Jakande, who passed on Thursday, aged 91.

The Governor in a statement by his Chief Press Secretary, Yinka Oyebode, described Alhaji Jakande as a selfless leader, statesman, and a role model who utilised public service effectively for the development of the people.

Dr. Fayemi described Alhaji Jakande as a leader with uncommon accomplishments, one of the founding fathers of progressive politics in Nigeria, and a committed Awoist who elevated service to the people above other considerations.

The Governor who described Jakande’s death as an irreparable loss to Lagos State and Nigeria as a whole, said the late statesman spent his life as a committed and diligent public servant and a leader who loved his people dearly.
He said the late elder statesman had immortalised himself in the hearts of the people through numerous impactful programmes and projects he executed while in office.

While noting that the deceased made his mark in the media before venturing into politics, Dr. Fayemi said the ” Action Governor” excelled as a reporter, editor, Publisher, and administrator, adding that his public service record was untainted.

According to him, the late statesman used his profession as a journalist to fight colonialism to a standstill paving the way for the independence achieved on 1st October, 1960.

The Governor said the urge to serve the people motivated the deceased to join partisan politics as a member of the Action Group (AG) and later the Unity Party of Nigeria (UPN), the platforms on which he was elected as the first civilian Governor of Lagos State in 1979.

“Baba was humility and simplicity personified, a pacesetter, torchbearer, trailblazer, and a servant leader who served Lagos State and Nigeria to the best of his ability.

“We are not mourning. We are celebrating a life well spent in the service of humanity. Our consolation and that of the children and the entire family is that baba lived well and earned a good name. He will continue to live in the hearts of the people. May Allah grant him Aljannah Firdaus.” He added.