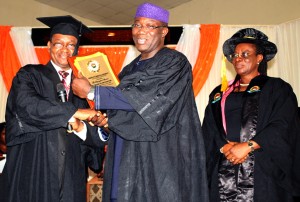 As calls for the Sovereign National Conference dominate daily public discourse, Ekiti State Governor, Dr Kayode Fayemi has said that the Federal Government does not need a conference to perform its constitutional duties, saying that the sudden U-turn of the central government is diversionary.

Delivering a lecture at the 4th Convocation lecture of the Joseph Ayo Babalola University,  Ikeji Arakeji on Monday, Governor Fayemi stated that the decision of the Federal a government to convene the conference is a welcome gesture but Nigerians are skeptical about the the real motive behind the sudden turn around, even as it has a deficit of national responsibilities to address.

“This administration suffers from a severe credibility and performance deficits that readily casts doubt on its capacity to undertake an exercise with such import for our national destiny. We see this as a diversionary manoeuvre to distract attention from the pressing questions of the day”, he said.

“The national question also involved issues of identity vis- a- vis ethnic minorities in a political context dominated by three major ethnic groups and the security of the minority religious enclaves in a milieu defined by the politicization of religion. There were debates over the fairness of affirmative action programmes as ordained by the principle of federal character and of the use of quotas to determine access to opportunities at the expense of merit”.

While expressing worry at the alleged electoral malpractices in the “inconclusive” Anambra election, Fayemi stated that the nation might need more than just a national dialogue if this is a harbinger of elections in 2014 and 2015; saying that the nation needs an integrated biometric voter registration and balloting system.

The Governor added that if the Presidency was a trust worthy and honest actor for the proposed conference, he should “quit sitting on the Uwais electoral reform report” and start passing into law the many fine recommendations of the report.

While saying that the diversity of Nigeria is not the gravest danger to the country, Fayemi asserted that Nigerians want the central government to “govern the nation by addressing our major problems with urgency and wisdom” and begin a full forensic audit of the national treasury.

Governor Fayemi ended the lecture by saying that “the day of a true national dialogue will come but it shall be for the people of Nigeria to determine”.

Earlier in his remarks, the Pro-Chancellor and Chairman of the Governing Council of the University, Prof. Anthony Imevbore, expressed worry that the proposed national conference could end up simply as an emblem rather than an antidote for Nigeria’s ills and fragmentation if the President does not manage to establish a genuinely inclusive and effective dialogue.

At the event were the Deputy Governor of Ekiti State, Prof. Modupe Adelabu, members of the State Executive council, the Vice Chancellor of the University, Prof Sola Fajana, some principal officers of the university and undergraduates among others.