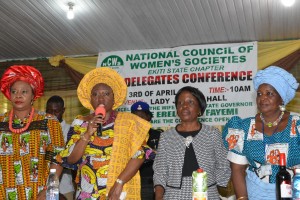 Wife of Ekiti State Governor, Erelu Bisi Fayemi, has advised the National Council of Women’s Societies to conduct credible elections in its 36 states chapters that will be a reference point for its affiliate unions.

She gave the advice at the 4th Delegate Conference of the council held in Ado-Ekiti, on Thursday, where election was expected to be held to usher in new executive members for the state chapter.

As the grand matron of the state NCWS, she also promised to use her position to ensure that the council receives subvention from the government, as well as the construction of a befitting secretariat during the second term of Governor Kayode Fayemi.

The National President of the NCWS, Chief Nkechi Mba, had led a delegation from the parent body to the conference for the election.

With the Ekiti election coming four years behind schedule, the governor’s wife told the delegates that it would be a moral burden for the NCWS if the council failed to conduct transparent and credible election not only in Ekiti, but anywhere in the country.

She said that the NCWS would not have any moral right to admonish any affiliate union that conducts questionable election if the parent body failed to get it right.

She blamed the political upheaval that predated the Fayemi’s administration for the delay in the conduct of election into the state council of the NCWS four years after the tenure of the Mrs. Nike Obatayo-led executive had lapsed.

According to her, Thursday’s election became a reality as a result of the pervading peace and tranquility in the state under the new dispensation.

She said, “There are some things that have happened in this state since Governor Kayode Fayemi came on board that we are proud to say have not happened anywhere else in Nigeria.

“We are the first state to domesticate the National Gender Policy. We now have the Equal Opportunities Law that guarantees 35 per cent affirmative action among many of its lofty provisions. We also have a comprehensive Gender-based Violence Prohibition Law in place.

“Governor Fayemi is a clear supporter of women’s rights issues and I have had the opportunity to work with women in various parts of the world.

“We have brought that to bear in our dealings with Ekiti women by ensuring that Ekiti women don’t have to beg to be included in governance processes.”

With particular reference to the NCWS, she stressed the need to ensure that the women put their house in order to sustain all the gains made as Ekiti women under the Fayemi-led administration.

In her remarks, the national president of the council appreciated the role of Ekiti State Government in advancing the cause of women and urged women to speak with one voice in fighting for their rights.

The president advised executive members of state chapters of the NCWS not to overstay their terms and urged them to play the role expected of them as umbrella body for women’s societies.

Earlier, the outgoing President of the State Council, Mrs. Nike Obatayo, commended the state government and the wife of governor for elevating women to greater heights through deliberate gender mainstreaming policies.