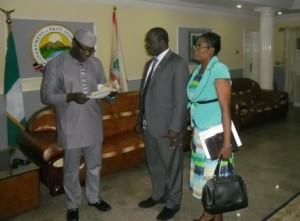 Governor Kayode Fayemi with Chairman of the State Water Corporation, Engr. Bode Adetunji and general Manager of the corporation, Engr. Olabisi Agbeyo, while making the payment for the Government house water bill.

Governor Fayemi said the payment was in fulfillment of his civic duty as the number one citizen of the State, adding that the huge volumes of water is consumed in the Government House daily basis.

The Governor who expressed his preference for payment into the Corporation’s bank account, urged the management of the corporation to regularly furnish the Government House and other users with the water bill in order to avoid accumulation.

In his remarks, the Chairman of the Corporation, Engr. Olatunji urged the people to emulate the Governor’s gesture by paying their utility bill as and when due so that the corporation could meet the water needs of the people, even as he said that water supply is not free.

He stated that government is investing in the sector so that citizens could have access to potable water.

It is recalled that the corporation, had earlier in June, introduced the meter billing system for some categories of consumers regarded as ‘strategic consumers’. This include bottling companies, eateries, government house and institutions.