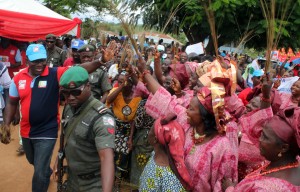 Ekiti State Governor, and the All Progressives Congress (APC) candidate, Dr. Kayode Fayemi, has been described as a “tree planted by God that cannot be uprooted in the June 21 governorship election”.

This was the position of a chieftain of the Peoples Democratic Party (PDP), Mr. Ayo Owoseni, who defected to the APC with his followers at a rally addressed by the governor in Ijesa-Isu in Ikole Local Government Area on Thursday.

Apart from Owoseni, the Secretary of the Women Wing of the Labour Party (LP) in Ikole LGA, Mrs. Remi Agunloye, led scores of women into the APC with a pledge to work for Fayemi’s victory.

Former Special Adviser to former Governor Segun Oni on Policy and Strategy, Mr. Ben Oguntuase who also defected to the APC said a vote for Fayemi is a vote for continuation of development and peace in Ekiti.

Oguntuase who defected at the rally held in Ikole said the Oni group was the pillar of the PDP in the state but they had to leave because of their resolve not to allow a minority in their former party to take the state to slavery.

The former Special Adviser said Fayemi must be re-elected so that Ekiti’s development would not be put on reverse gear.

Another PDP  stalwart in the area, Chief Olusola Ayodele, who defected alongside his supporters said he was leaving the darkness for the light.

The APC candidate was on the second leg of his campaign tour to communities in Ikole LGA where he urged the people to come out en masse and exercise their franchise in favour of the ‘Broom Party’.

Owoseni who served as a councillor during the Segun Oni administration said he had worked against Fayemi in the past and was among the former local government officials that instituted a legal action against the state government.

The former PDP man said he was repenting and joining the APC because Fayemi, in the last three and half years, has changed the face of the state and brought development closer to all nooks and crannies of the state.

Owoseni said: “We are defecting to the APC because this governor has performed wonders since he came to power and everybody including those of us who were in the opposition acknowledged this.

“It is a taboo to kick against the thorns, I was one of those who dragged the government to court but we never knew that Fayemi is a humble, compassionate and caring person and we never knew he could perform these wonders.

“A tree planted by God cannot be uprooted. Look at the road from Ado to Ijesa-Isu which used to take over two hours now takes me about fifteen minutes because of the new road constructed by Fayemi.

“These are great testimonies of what we can see, feel and count during Fayemi’s governorship of Ekiti and that is why we have become born again and repentant by joining the party that is driving the vehicle of Ekiti development”.

Mrs. Agunloye who defected from the LP said she and other women in their former party decided to join the APC because Ijesa-Isu community has benefited immensely from the Fayemi administration.

She also said they ditched the LP because of various developmental projects carried out in their community and the empowerment of many indigenes of the town in the areas of job creation, payment of monthly stipends to the aged and    political patronage enjoyed by indigenes.

Mrs. Agunloye added that they are also joining the APC because it is only the party through which the dream of a new Kajola Local Government could be realized.

The defectors were received into the APC by the interim party chairman, Chief  Olajide Awe.

Fayemi expressed joy with new members coming in from other political parties saying it was a pen appreciation of a government that knows the value of the people.

He said his administration still has more to do despite the work done in Ijesa-Isu which include Ijesa-Isu-Ode Road, Ijesa-Isu-Iluomoba-Ado Road, five kilometers roads, renovation of the general hospital and secondary school and ongoing work on the Obanla’s palace.

He expressed his readiness to work harder for the people of the state in key sectors to make Ekiti a state that would become envy of others in the country.

The governor urged the electorate to be watchful on election day and ensure that their votes count.

Fayemi urged the people to keep faith with a government that provides them with life-changing and quality projects rather than a government fond of executing shoddy jobs.

The APC candidate said there was nothing he promised Ikole that he had not fulfilled so far urging the people to continue to vote for the governor they can trust.