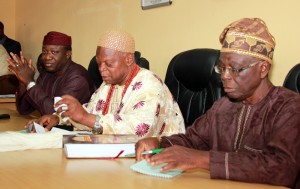 L-R: Ekiti State Governor, Dr Kayode Fayemi; Chairman, State Council of Obas, Oba Adamo Babalola; and Special Adviser to the Governor on Chieftaincy Affairs, Chief Aderemi Ajayi, during a meeting with the Governor, at the instance of the traditional rulers, ahead of the June 21 election, in Ado-Ekiti.

The Governor of Ekiti State, Dr Kayode Fayemi has said that the supportive roles being played by traditional rulers for the rapid transformation of the State make the Ekiti monarchs rare breed of honourable royals.

The Governor said this at the weekend while presenting the Staff of office and Instrument of Appointment to the new Attah of Ayede, Oba Adebayo Orisagbemi, that the traditional rulers have stood side-by-side with government in promoting sustainable development in the State.

Dr Fayemi stressed that the achievements of his administration are to a large extent a “function of our governance agenda which promotes the inclusion of critical stakeholders in the administration of the State”.

He stated that the quest to build a greater Ekiti is progressing and his government will not relent in the pursuit for the Ekiti of “our dreams”.

“I want to seize this opportunity once again to thank all our royal fathers for being there all the time to support this Administration in our bid to develop this State, your efforts and love are highly appreciated. Good health, sound mind, prosperity and long lives shall continue to be yours by the special grace of God”, he said.

The Governor who said that there is a huge responsibility placed on the traditional rulers to ensure a peaceful and free electioneering urged the monarchs to mobilize the people “against the enemies of democracy who try to subvert the will of the people in the coming polls through rigging and violence”.

Fayemi charged other candidates in the coming poll to shun violence before, during and after the election so as to guarantee the peace which the State is known for,urging them to engage in campaign based on issues and civility.

While congratulating the new monarch, the Governor advised him to imbibe the culture of broad-based inclusive governance so that no member of the community would feel marginalized.

Fayemi also urged the people of Ayede to cooperate with the new monarch in developing the community by shinning political bickering, mudslinging and other vices that can debar progress.

At the event were the former governor of the State, Otunba Niyi Adebayo, speaker of the State Assembly, Dr adewale Omirin, and traditional rulers especially the chairman of the State Council of Traditional Rulers, Oba Adamo Babalola among others.