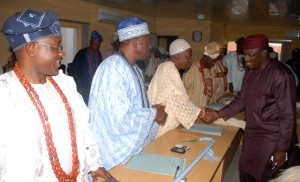 Ekiti State Governor, Dr Kayode Fayemi (Right); exchanging pleasantries with a cross section of Traditional rulers, during a meeting, at the instance of the State Council of Obas, ahead of the June 21 election, in Ado-Ekiti.

Apparently worried by the spate of pre-election violence in Ekiti State, Traditional Rulers in the State are considering meeting President Goodluck Jonathan in order to prevail on the political actors in the forthcoming guber elections in the State.

The Council of Traditional Rulers also agreed to invite both the INEC’s Resident Electoral Commissioner, Alhaji Halilu Pai on the yet-to-be collected Voters Cards and the Security Operatives in the State to intimate the Council on the plans to curb the political violence.

The monarchs had during their 165th council meeting held in Ado Ekiti on Tuesday invited Governor Kayode Fayemi  for an interface on the state of security and then decided that it is pertinent for them to meet the President since Fayemi is also a candidate in the election and any step taken by the Governor may be interpreted as partisan.

At the Council meeting presided over by its Chairman, Oba Adamo Babalola, the monarchs expressed serious concern that the political parties did not keep their promises not to resort to violence during campaigns as agreed at a meeting held with all the candidates early this month.

Oba Adejugbe expressed worry that if pre-election violence could  characterize the Ekiti poll which is expected to be a model for the 2015 general election, then there is need to inform the President of the situation so that the trend can be addressed before it gets out of hands.

“With what is happening now, we are worried and we had some lines of suggestion that if need be for us to meet Mr President and let him know that we here in Ekiti State need peace before, during and after the election. Secondly that we need to meet the security operatives in the State so that we can let them know that we are worried and concerned and for them to get prepared for the june 21 election. And third, it is necessary for us to meet the INEC officials because we are told that some voters cards are still there and some people are anxious to collect their cards”, the monarch said.

The Ewi alongside the Olojudo of Ido Ekiti, Oba Idowu Faboro had earlier expressed worry at the failure of the electoral umpire to produce voter’s cards for some members of their households despite registering at the same time with those who have collected theirs.

Oba Faboro said this if not addressed in time may hinder many people in the same category from exercising their civic right to vote during the election.

Earlier in his remarks, Governor Fayemi had thanked the monarchs for their support in ensuring that peace reign in their communities; adding that they still need to intensify efforts at curbing the trends of violence which is beginning to characterize politics in the State.

The Governor who is also the candidate of the All Progressives Congress in the forthcoming poll urged the traditional rulers to talk to politicians in their domains to shun the politics of bitterness and acrimony; saying that if the 2011 general elections could be done peacefully, why then would campaigns be full of violence.

Fayemi decried the involvement of external elements in the violence that erupted during the campaign in Ikere Ekiti last weekend; adding that the influx of thugs from a neighbouring State is worrisome.

He says: “ I think it is high time our Royal fathers rose up again to curb the trends of violence because you are the ones who control your domains. You can help us to talk to the politicians in your domains to shun the politics of bitterness. It is possible to have a peaceful election and campaigns should not result in crisis. If 12 Governors came to Ado Ekiti and there was no crisis, why should one governor come to the State on political campaign and unleash terror on the people?”

On the allegation that he instructed the monarchs not to attend to President Jonathan when he visits, the Governor said he is not even aware that the President intends to visit Ekiti State because Jonathan had not written to inform him of the purported visit as protocol demands.

Fayemi stressed that he cannot prevent the President from paying a private visit to any monarch but the State Governor is expected to be informed of any visit by the President just as the President did when he came for his Presidential campaign in 2011 and the visit to Afe Babalola University Ado Ekiti.