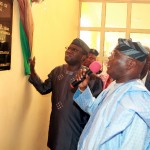 Former Vice President, Alhaji Atiku Abubakar on Monday inaugurated the 300-bed Oba Adejugbe General Hospital, Ado Ekiti, built by the Dr Kayode Fayemi administration; saying that the Governor’s feat is an indication that Nigeria needs devolution of power to the states in order for state governments to perform optimally.

The Former Vice President who described Fayemi’s performance as extraordinary said it was high time the Federal Government stopped getting involved in some sectors of the economy because they are better handled by state governments which are closer to the people than the federal government.

Atiku added that most of the developmental projects he had commissioned in recent time in some states were initiated and completed by state governments.

He expressed amazement at the physical infrastructure which Governor Fayemi had put in place in Ekiti State, noting that only an extraordinary and intellectual leader could do such.

“I think his (Fayemi’s) performance is extraordinary. Early this year I was here and when I came here, this very edifice was not available and driving round the city is also amazing because there are quite a number of infrastructural facilities that have come up. So I think it is an extraordinary performance”, he said.

The APC Presidential aspirant stressed that the Federal Government had too much power and when some of the power it wields is devolved to the state government, the Presidency will be less attractive to people who do not have well thought out plans for the country.

Atiku opined that the devolution should also be accompanied by a commensurate increase in the resources that will go to States so that they can meet their responsibilities.

Atiku said: “I have always said that our federal government is too powerful. Our federal government has taken in so many responsibilities and some of these responsibilities can best be handled by the states. What I am saying in essence is that there is need for us to devolve more powers to the states and give more resources to the States. When we move the powers, let us also move away the resources that the federal government controls and move them back to the States so that we can see real development in place. Believe me, in the last two months that I have been commissioning roads, schools, hospitals, water supply projects and so on, none of them is a federal project. They are all State projects. So why don’t we then devolve more powers to the States and give them more resources and leave the federal government with very little: foreign affairs, defense, this will make the Presidency less attractive”.

In his remarks, Governor Fayemi commended the Segun Oni-led government for its hard work in initiating the hospital project; saying that the Fayemi-led administration’s commitment to a healthy population led to the completion of the project.

The Governor who described the commissioning of the Hospital named after the traditional ruler of Ado Ekiti, Oba Adeyemo Adejugbe as timely, said it became imperative to give attention to the health care sector because health is wealth.

Fayemi said: “What is happening today is demonstration of another promise kept. What we have with this edifice as well as 18 General Hospitals around our 16 local governments is to let our people know that we are committed to their well being. We are committed to good health. We are committed to ensuring low maternal mortality, increased life expectancy, committed and virile people in our State. We have achieved this. It is a long way to go but it is not accident that today in the federal republic of Nigeria according to statistics of the Federal ministry of Health and WHO, Ekiti has the highest life expectancy in this country.

“Today, it is also not an accident that apart from the free health mission that we run, we were the first State to institute a social welfare programme that pays a stipend to our elderly population, and that has contributed to prolonging the lives of those who ordinarily could not have been here with us if they have not been taken good care of by the support safety net that we provided to the segment of our population”, the Governor said.

On resumption of schools in the State which was delayed as a result of the outbreak of Ebola in some parts of the country early in the year, the Governor said his government has not only put in place an isolation unit in the State but also procured sanitary equipment  for all the 187 secondary and 889 primary schools across the State.

Fayemi who said the provision of the equipment was preceded by a training of session for those who would handle the equipment stated that sanitation should be a major priority for the State and the people should focus more on their hygiene before the outbreak of any diseases.

“As Nigeria grapples with the issue of Ebola which we have finally taken care of, our ministry of health has also been very busy, not only in putting isolation unit in place but also in ensuring that as children go back to school on Wednesday, all our 187 secondary schools and 889 primary school would have temperature gauge, all hand washing equipment and materials that the state has provided with training across the State. It is not just an Ebola issue, its a sanitation challenge and I think it should be a priority for us as a State, not when cholera epidemic is here or Ebola or diarrhoea is here. It is a permanent engagement in ensuring the healthy population at all times”, Fayemi said.