Zik Prize Will Spur Me To Perform Better, Says Fayemi 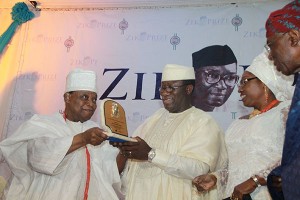 Ekiti State Governor, Dr. Kayode Fayemi, has said the Zik Prize in Leadership Award he received at the weekend has imposed on him a
burden to perform better and work hard to justify the confidence of the people of the state.

The Governor who made the remark Sunday evening while fielding questions from a panel of journalists on  the Yoruba version of his monthly media chat, “Meet Your Governor”, said he was humbled to be considered worthy by for the award for good governance in Ekiti State.

He noted that eminent Nigerians who are members of the advisory board of the Public Policy Research and Analysis Centre (PPRAC), the initiators of the award cannot be bought over noting that their assessment was based on objective analysis before arriving at the
choice.

Dr. Fayemi stressed that Dr. Nnamdi Azikiwe, the first President of Nigeria, after whom the award was named, represented service,
commitment, sacrifice and excellence in governing adding that he was proud to have won an award named after the great statesman.

He said, “The Zik Prize in Leadership Award which I won last Saturday is a motivation to do more for the people of Ekiti State.

“In fact, it has imposed on me a burden to perform better to justify their confidence in me as their elected governor and it has also made me to realize that there is still much work to do.

“If you are recognized among your peers, it is an indication that you have distinguished yourself.

“It is not something you can buy with money, I never asked for it but eminent persons on the panel found me worthy of this honour and this will further motivate me to work harder in serving our people.”

Speaking on while students in public secondary schools recently submitted the laptops given to them by his administration, Dr. Fayemi said the directive became necessary to upgrade the laptops and prevent them from being used for wrong reasons by students.

When told that some schools are collecting N100 from each of the students with laptops, Dr. Fayemi clarified that his administration
has not directed the schools to collect N100 from the students maintaining that the laptops were given to them free of charge.

The Governor also added that the equipment were also submitted by the students to equip them with more education software that would help the students perform better in their academic work.

Speaking on some policies being carried out by Governors in South West Nigeria, Dr. Fayemi said governments in the region are using peer review mechanisms to develop the states noting that the laptop per child initiative which was pioneered in Ekiti was also replicated with Opon Imo in Osun.

He added that the monthly financial stipends which was also started by his administration is also being copied by Osun while other states in the zone are learning revenue generation from Ogun and Lagos States and safe motherhood project from Ondo.

The Governor pointed out that the Development Agenda for Western Nigeria (DAWN) is not about politics noting that governors in the
region irrespective of the political parties they belong to have resolved to make South West a reference point of development in
Nigeria.

Dr. Fayemi disclosed that another set of youths under his administrations Volunteer Corps Scheme would soon come into camp while
those who had just completed their two-year stint in the scheme would be empowered to be on their own.

While noting that many of the volunteers had secured jobs into the civil service, teaching service, fire fighting, traffic management,
among others, the Governor revealed that others would be given financial empowerment to carry out businesses to add value to the
economy.

Reacting to a question on the recent procurement of new vehicles for magistrates, Dr. Fayemi said his administration is concerned about the welfare of judicial officers saying they should not be denied of what is due to them.

He revealed that it is not good for judicial officers whose courts of assignment are located in places like Efon, Aisegba, Ode and Omuo to be going to their duty posts in public vehicles and commercial motorcycles.

Dr Fayemi reiterated the commitment of his administration to take urban renewal to the three divisional headquarters of Ijero, Ikole and Ikere while rural development already commenced would continue.