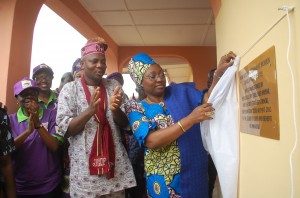 Wife of Ekiti State Governor, Erelu Bisi Fayemi, has said that the country’s hope of attaining the Millennium Development Goals by 2015 remains a pipe dream except women are economically empowered to contribute their quota.
Besides, she said that promotion of the well-being of women should top the agenda of government at all levels for the country to catch up with the rest of the world.

She said this during her visit to Oja Oba Otun, in Moba local government in continuation of her market outreach programme to the 16 local government areas of the state when buses were donated to each market, while traders received cash grants.

Apart from the donation of 16 brand new 18-seater buses to markets in the LGs, the governor’s wife said that about N25m would be doled out as cash grants to boost the businesses of the traders.

The visit also witnessed health talk by an official of the state’s ministry of health, Mrs. Kemi Akinleye, as well as HIV/AIDS sensitization by a team from the State AIDS Control Agency, led by the Project Manager, Dr. Charles Doherty.

Scheduled to span three weeks, the programme is a collaborative effort of the ministry of women affairs, social development and gender empowerment, local governments and the Ekiti Development Foundation (EDF). The foundation is the brainchild of the wife of the governor.

Erelu Bisi Fayemi stressed that business development and gender mainstreaming were the fulcrum of women empowerment.

Apart from cash grants and buses, she said that each market would also receive plastic containers, standard measure bowl and pouch with waistband for traders to keep their money during business hours.

She said, “We can’t achieve the MDGs as a country without empowering women. The well-being of women should also be a major concern of government at all levels.

“My work around the world has exposed me to the basic needs of market women to develop their businesses and for them to be able to operate in an environment conducive to trading.

“Part of the promises of the Governor, Dr. Kayode Fayemi, during the campaign for last governorship election was to change the fortunes of market women and also the market environment. This informed this market outreach I’m embarking upon.”

She added that the new markets being planned by the government would have modern facilities, including toilets, crèches, water facilities and lock-up shops.