Why We Donate Vuvuzela To Fayemi’s Campaign Organisation, By Foundation 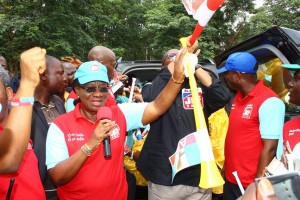 The introduction of Vuvuzela to the JKF (John Kayode Fayemi) Campaign Organisation has introduced a new dimension into electioneering campaigns in Ekiti State, even as the donor explained his motive.

Vuvuzela, the instrument that brought glamour into the 2004 World Cup staged in South Africa has found its way into political rallies of incumbent Governor Kayode Fayemi and the standard bearer of the June 21 governorship election in Ekiti State.
Youths have been blowing the instrument to spice speeches and addresses of party chieftains at rallies in communities.
House of Representative Member and Director-General of the campaign group, Mr. Bimbo Daramola, who received the truckload of the materials from Caring Heart Foundation, described the donation as a boost to the ongoing campaign of his candidate.
Daramola later made a symbolic presentation of the materials to the governor through his deputy, Prof Modupe Adelabu, who coincidentally is the mother of the donor’s representative.
According to Daramola, Vuvuzela has the sound of a trumpet, which he noted symbolizes victory. “We are sure of victory with these campaign materials”, he said.
Also speaking, representative of the Foundation, Mr. Dapo Adelabu said the donation was his contribution to the re-election bid of governor Fayemi who he noted, has doing a lot to bring Ekiti State to loftier heights.
Besides, he described the donation as a message to politicians to be sportsmanly while politicking as only the best can triumph in any electoral process.
He said the incumbent has laid a solid foundation for greater Ekiti and therefore should be supported by every lover of progress residing in the state