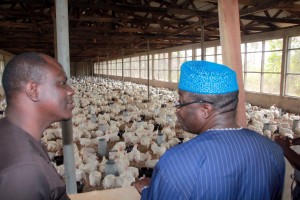 Ekiti State Governor, Dr Kayode Fayemi (R); with Commissioner for Agriculture and Natural Resources, Mr. Babajide Arowosafe, during an inspection of one of the State's Poultry hubs, an initiative of the Youth in Commercial Agricultural Development (YCAD) Programme, at Ikere-Ekiti.

Ekiti State Governor, Dr Kayode Fayemi has said that the poultry farms initiated and abandoned by one of his predecessors, Mr Ayo Fayose, could not be revived because the poultry project was never designed to succeed.

The Governor disclosed this to newsmen on Monday shortly after an inspection of a poultry farm and processing plant established by his administration in Ikere and Ado Ekiti respectively. He said the poultry project of the Fayose-led government was not designed as a viable project.

This, he said, explained the reason the present government has not bothered to resuscitate it like it did some other moribund projects and industries established by past administrations.

Governor Fayemi, who was conducted round the poultry farm and processing plant by the Commissioner for Agriculture, Mr jide Arowosafe, stated that Fayose’s poultry project which gulped more than a billion naira also did not have a sustainability plan, adding that there was no equipment in the processing plant purportedly put in place by the erstwhile governor in his country home, Afao Ekiti.

He stressed that his administration had put in place a processing plant in Ado- Ekiti for farmers under the Youth in Commercial Agriculture Development (YCAD) with less than N20 million while the Fayose-led government merely paid lip service to the people of the State having expended a whopping sum on a similar project that never took off.

It is recalled that Fayose is still being tried by the Economic and Financial Crimes Commission (EFCC) over allegations of  misappropriation of the funds meant for the poultry project.

Governor Fayemi said: “This government is serious about agriculture and we are not playing lip service to it. The Fayose farms are not even revivable if you look at them. The Benin-Owena poultry farm that we have revived, you can see the quality of the building. We put less than N50 million to revive those huge poultry units along Ikere-Ise road. If you compare it to those wooden sheds that are called poultry farms by the previous administration, they have already collapsed; they have all crashed because they were not meant to last in the first instance. It is obvious why we are confident that, placed side by side the antecedent of our predecessor, the difference is like 7up.

“The processing plant is put in place for YCAD with less than N20 million, what we have done for our YCAD farmers  with less than 20 million is what was done in this state a few years ago with over a billion naira that is still the subject of investigation now. The project never saw the light of the day. There was no processing plant, there was just a building put up in Afao that was supposed to lead to the processing plant but there was no equipment there. If you go to all the units in the 16 local government areas you will know what I am talking about”, he said.

While reiterated the commitment of his administration to making Ekiti the food basket of the South-West, the Governor stated that the processing plant has the capacity to process no fewer than 2,000 birds on daily basis as Ekiti is poised to supply the State and neighbouring states with fresh frozen chicken.

Fayemi said he was confident that this will turn around the fortune of poultry farmers in the State and improve on government’s efforts in the sector in the last three years.

“What you see here is a  processing plant that can daily treat 2,000 birds right from scalding to feathering  and sending it to the market. The poultry will feed the processing plant. You have seen the cold room and the various processing units before it gets to the market through the Fountain Markets.”, he added.

Also speaking, the Commissioner for Agriculture and Natural Resources, Mr Arowosafe said the processing plant has started a test-run but would in the coming week begin full production.

The Commissioner explained that the state has 27,000 birds and is in talks with business organizations from different parts of the country to market the product while this will also reduce the stress of Ekiti consumers in travelling to other states to get frozen chicken.