Featured, NewsWhy We Are Participating In Confab – Fayemi

Why We Are Participating In Confab – Fayemi 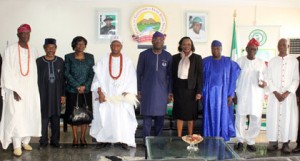 Ekiti State Governor, Dr Kayode Fayemi has explained that the All Progressives Congress (APC)-controlled states will be participating in the national conference “out of a sense of nationalistic responsibility”.

The Governor who stated this while charging delegates representing the State at the conference also added that the State is participating since he is governor over all Ekiti people regardless of political inclinations and it is a necessary step to safeguard the interest of
all Ekiti people.

Dr Fayemi who expressed doubt at the capacity of the Federal Government to organize such “a sensitive national undertaking away from political manipulations” opined that the conference will achieve the goals of Nigerians rather than the people who convene it.

The Governor expressed optimism that the conference would afford Nigerians opportunity for robust deliberations in identifying the “plethora of problems that has beleaguered us as a nation and to collectively agree on possible solutions”.

He added that Nigerians would seize the opportunity to restructure the Nigerian state, ‘guided by the principles of true federalism, equity and justice’.

Meanwhile the delegates from Ekiti State will on Wednesday meet stakeholders from different segments of the state with a view to getting Ekiti people’s position on various issues that will be discussed at the conference.

According to Fayemi, open lines of communication would be established between delegates and Ekiti people so as to enhance easy input and feedback process during the course of the conference.

“The delegates being presented here today are going to the conference not to speak of themselves, but to communicate the consensus position of all Ekiti people. It is therefore requisite that we create avenue whereby they can interact with the people robustly with a view to engendering inclusion in the determination of our priorities as a people as we negotiate our place in the emerging order of our federal republic”, he said.

While describing the delegates as people with unassailable integrity and patriotic devotion to the advancement of Ekiti State, the Governor urged them to see the opportunity given them to engrave their names in gold on account of a very sterling representation of Ekiti interest.

The leader of the delegation, Chief Deji Fasuan thanked the state government for choosing them to serve and promised on behalf of others not to disappoint Ekiti state in handling the herculean task.

The leader of the delegation, Chief Deji Fasaun thanked the state government for chosen them to serve and promised on behalf of others not to disappoint Ekiti state in the challenging task ahead.