Featured, NewsWhy Fayemi Is Different From Others, By Deputy

Why Fayemi Is Different From Others, By Deputy 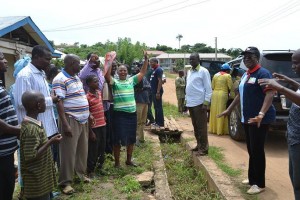 Abounding evidences of what Governor Kayode Fayemi across the 16 local government areas of Ekiti State have distinguished him from other candidates jostling for the governorship seat in the Land of Honour State, Deputy Governor, Prof. Modupe Adelabu said at the weekend.

According to the deputy governor, Dr Fayemi is seeking a second term mandate based on the strength of his performance and because he has kept faith with the pact he made in the Roadmap to Ekiti Recovery – the Eight-Point Agenda while his contending opponents in other political parties are merely giving campaign promises.
Mrs. Adelabu made the remark during the inspection of some of the roads that were recently graded in various quarters across the thirteen wards of Ado-Ekiti, the state capital.
She therefore warned the people not to be deceived by the campaign promises of the opposition but consider the reality of the visible landmarks of the Fayemi-administration in the three and a half years in office and vote him for another term.
The deputy governor said the grading of the roads was not done because of the imminent election as some detractors were saying but has been a regular programme since the inception of the administration.
She said: “Five kilometers per local government per year project has been addressing the problem of bad roads inherited by the government while electricity and pipe borne water has been extended to newly developed areas in the state capital and other local government capitals in the state.”
The deputy governor urged the people to vote governor Fayemi in the election to enable him complete those developmental projects and as well do more to enlist Ekiti in the club of economically-viable states.
Residents of the benefiting communities lauded the government for opening up their areas.
Mrs. Sikira Olofinlade and Mr. Babalola Azeez who spoke for Ireakari Estate and Itanla Quarters respectively described the road grading as timely and a welcome development.
They said the roads had been impassable for a long time and that the rains worsened the situation adding that the grading was a great relief to the people living in the areas as they could now drive their cars home instead of parking them in fat away place.
Also at Oluwatuyi  and Araromi Quarters, residents thanked the government for coming to their aids by grading the roads. They, however, urged the government to ensure the completion of the roads by constructing the drainages and possibly doing the asphalt overlay.
They also requested for a transformer to boost the electricity supply to their homes with the assurance to vote the governor in the election for continuity.