Why Ekiti People Will Re-Elect Fayemi For Second Term 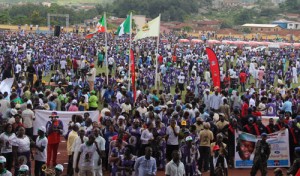 Ekiti State Governor, Dr kayode Fayemi will be re-elected for a second term in the June 21 governorship election in the state based on his record of achievements and transformative leadership style that has impacted positively on the people of the state.

The Chief Press Secretary to the Governor, Mr Olayinka Oyebode, who made this declaration at a forum in Ido-Ile Ekiti on Monday, said Ekiti people recognise and appreciate good work as well as good leaders and know how to give appropriate reward.

According to Oyebode, Governor Fayemi has improved the quality of lives of the people and the various communities in the last three and a half years through prudent management of the resources of the state and by being innovative.

He said while other aspirants in the race would be labouring to convince the electorate on their ability, Fayemi’s record of achievements in the areas of education and human capital development; health care delivery; youth, women and community empowerment; gender empowerment, tourism development ; modernised agriculture and the social security scheme would speak for him.

Describing other aspirants as pretenders, Oyebode said Governor Fayemi has raised the bar of governance in the state, adding that the Ekiti people, having tasted massive development by an accountable and compassionate administration are not prepared to go back to the era of brigandage that  characterised the state between 2003 and 2010.

Fayemi, according to him has been tested and has proved that he is a highly focused, dynamic and compassionate leader who has a genuine plan for the state and its people and a roadmap to achieving it. This, according to him, marked him out of a motley crowd of other opportunistic politicians who are out to con the people with disjointed claims that fail to add up.

“I am yet to see other aspirants say precisely what they intend to do for the state. Or how they intend to better the education or health sector. So, it shows they just want power for their self –serving sake. Or can anyone point at any known agenda of either the Labour Party , Peoples Democratic Party or the Accord Party candidates?

“Sometimes you laugh and cry when you hear some aspirants discuss their vision for the state. The other time one of them was discussing his educational plan, said he would change the name of the state university. Another said he would not take salary. I tell you Ekiti people have moved beyond this mundane and childish promises. Now is the time to tell the people what and what you would do to improve the education or tourism sector or else you have no business canvassing for their votes.

On the gale of violence in the state, Oyebode said the trend was a deliberate attempt by one of the aspirant who in the bid to hide his inadequacies has resorted to violence, name dropping and cheap blackmail. He added that violence would not earn anyone the people’s vote as Ekitis are not prepared to exchange the peace and tranquility of the three and half years for brigandage.

On allegation by the Labour Party (LP) candidate, Mr Opeyemi Bamidele that majority of the members of the state executive council are on his side, Oyebode said that allegation was not only puerile, it stands logic on the head. He explained, how can you have majority of the exco members on your side and they are ashamed to identify with you publicly. That is a badly concocted lie, quite idiotic.

“I can tell you the entire members of the state executive council are solidly behind Governor Fayemi, because they are part and parcel of the administration and the re-election campaign. And you see them with him at every rally and also playing leading roles in the house-to-house campaign.

On claims by Fayose that he was instrumental to Fayemi’s emergence as governor, Oyebode said that was another lie taken too far in the former governor’s desperate bid to seek relevance. According to Oyebode, Fayeose seems to have forgotten that Governor Fayemi had been in the governorship race since 2005 when he (Fayose) was still governor and that Fayemi together with some other well- meaning citizens of the state actually constituted the forces that confronted Fayose’s dictatorial government which culminated in his impeachment in October, 2006.

“Where is the logic in that statement? How and in what ways can you influence someone who worked against you and made him governor. Yes , Fayose went around town with posters urging the people to vote for Governor Fayemi, but that was during the re-run election of 2009. The fact is that Fayose was still in self –exile while Dr Fayemi contested the April 2007 governorship election which he won but was denied. It was the successful challenge of the outcome of the 2007 election at the tribunal and Appeal Court that led to the re-run election of April 2009.

“You will recall that a good number of former governors also supported Fayemi in the general and rerun elections, so for Fayose to claim that he made Fayemi governor is ridiculous and is nothing but an attempt to identify with a success story by any means possible.

“My advice to the aspirants is to spend more time within the remaining eight weeks to come up with well articulated manifestoes and state how they intend to better the lots of the people rather than resort to name calling, cheap blackmail and violence.”, Oyebode said, adding that he was sure the Governor would be re-elected regardless of the amount of lies told by the the camps of the other aspirants.