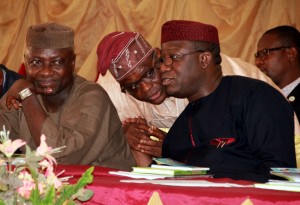 The Ekiti State Government has vowed not to relent in its fight to banish poverty and unemployment from the State by giving support to the growth of Small and Medium Scale Enterprises (SMEs) in the State.

The State Governor, Dr Kayode Fayemi made the vow in Ado Ekiti at the 3rd South-West Regional Integration programme which focuses on Micro-SMEs; saying that the alarming rate of unemployment in the country is gradually turning to a wild fire which no one can play
with.

While stating that SMEs have significant roles to play in economic development as they form the backbone of the private sector and account for about 60% of employment across the world, Dr Fayemi explained that the Western Regional Integration agenda currently
focuses on SMEs as one of the vehicles for driving the “objective of presenting the region as a bloc for global competitiveness, by strategically harnessing its economic competitive elements”.

This shift, he said, is to create wealth as well as address unemployment which is the cause of many of the social malaises bedeviling the society.

The Governor recalled that his administration last year inaugurated a 23-man State Council on Micro, Small and Medium Enterprises to coordinate the activities of SMEs in the state, having realized the roles that SMEs play in economic development, job creation and wealth
creation.

While disclosing that the State Government is in partnership with the Central Bank of Nigeria in its efforts to inject N220billion low interest long term development finance for the benefits of SMEs, Fayemi said the government has appropriated about N300million for private sector development aimed at providing soft loans to SMEs as well as “facilitate capacity building opportunities for operators on the rudiments of doing sustainable business”.

“We are also in partnership with the Central Bank of Nigeria in its efforts to inject N220billion low interest long term development finance for the benefits of SMEs. The state government also recently set up a Cooperatives Board with a mandate to organize all cooperative societies in Ekiti State and to regulate their activities in a way and manner that the common challenges they encounter particularly in the area of accessing loans can be addressed. Our partnership with the Bank of Industry and Bank of Agriculture is also exclusively pro- SMEs”, he said.

In his remarks, the Director-General of DAWN Commission, Mr Dipo Famakinwa asserted that SMEs contribute a lot to the economic development of a nation.

Famakinwa who said the integration initiative is about the people stated that the regional integration agenda is aimed at harnessing the resources and providential endowment available in States of the region.

Also speaking, the Commissioner for Integration in Ekiti State, Mr Funminiyi Afuye said many of the development recorded in Nigeria started in the Western Region as the region set the pace for infrastructure development because of the common policies and agenda in the region under Chief Obafemi Awolowo.

Afuye added that the integration strategy is gaining ground as private, public and international organizations are now partnering with the DAWN Commission in the consummation of the development strategy.