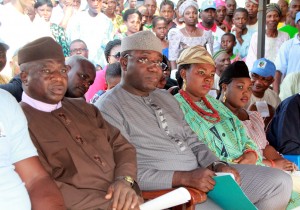 Ekiti State Governor, Dr Kayode Fayemi on Friday, reviewed his one month tour of communities in the  state and town hall meetings and declared that the people of the state are not only passionate about development, but are frank and courageous in their  engagement with government as well as their elected representatives.

Governor Fayemi who ended the tour of 129 of the 130 communities in the state with a town hall meeting in Ado-Ekiti, the state capital on Friday, said that  his one month tour and engagement with the people of the state has revealed a lot about the people’s readiness to partner with government in the bid to accelerate development.

Speaking with newsmen in Ijan Ekiti  before heading to Ado-Ekiti, the Governor said that the meetings have been informative and enlightening, stressing that  the people expressed their commendation as well as areas they felt government needed to meet their needs.

Governor Fayemi added that the people’s reactions showed that  government has to be responsive and responsible to the people who put it in place.

” It has been enlightening, very informative. The people  have been very frank. You know Ekiti people, when they are not happy they tell you. When they have issues they tell you. When they are happy, they also let you know. We have seen all of these in my visit to all the communities. This shows that government can really be responsive and responsible to the people who have put us in office”, he said.

Governor Fayemi said that he is happy that the people now see themselves as critical stakeholders in development, as the administration is doing development with them and not to them.  He added that the town hall meeting is a model that other states should take into account  in view of the importance of the people as the very basis of governance.

Fayemi who explained that he had commissioned no less than 84 projects in the communities visited, expressed satisfaction with the manner the projects were executed by the communities, even though they got the funding from government.

He said : “I have gone to 129 communities so far. In all of the communities I have had the opportunities to commission projects in 84 of them, ranging from palaces to police station, transformers, schools, health centres and a whole range of projects that they have taken upon themselves to put in their communities.

“All that we did was to give them financial support. They chose their contractors, they bought the materials themselves for the construction and delivered the projects on time and on cost in many instances and it gives the sense of what the people are capable of doing when you involve them in leadership. They are more transparent and accountable  and their projects are cheaper than projects that government awards to contractors”.

In Ado Ekiti where the community had urged the Government to include the Udiroko festival in its tourism agenda so that Ekiti culture could also be a major attraction to international communities, the Governor said government would look into this and other  traditional festivals of other communities with a view to boosting tourism drive of the government.

Fayemi also assured that water supply to new areas in the state capital will be addressed as water will get priority attention in next year’s budget while some roads which were also requested for will be given immediate attention.

Meanwhile the Ewi of Ado Ekiti,  Oba Adeyemo Adejugbe has rallied support for Governor Fayemi saying that all Ekiti indigenes should support the administration in the total transformation of the State.

The traditional ruler who commended the Governor for the various transformational projects spread across the 132 communities in the State asserted that Ado Ekiti is the “sitting room” of the State and reflects the performance of government hence the positive impact the community has received from the Fayemi-led administration since 2010.

Oba Adeyemo while urging politicians not to overheat the polity said the State has enjoyed relative peace under Fayemi and the Governor’s political opponents should not turn their ambitions to a do or die affair which can affect the peace of the State.

He also worry at the Anambra guber poll which was allegedly marred by irregularities and warned the Independent National Electoral Commission against a repeat of such election as Ekiti State prepares for here guber polls next year.

The Ewi’s palace where the town hall meeting was held was filled with a crowd of Fayemi’s supporters and market women who express joy in the change of governance, saying that government no longer thinks for the people but allows the people think for themselves.