Featured, Features, NewsFEATURES: The Magic of a Governor’s Village Meeting

FEATURES: The Magic of a Governor’s Village Meeting 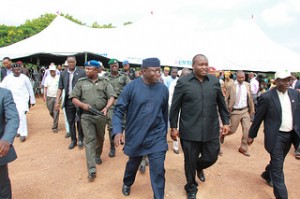 When Governor Kayode Fayemi of Ekiti State assumed office in October 2010 and he promised to run a participatory government, not many took him serious because such promises have become a hollow ritual of previous administrations. He soon proved them wrong and changed their skepticism to optimism when in November 2011, he started what he called pre-budget village square meetings, visiting Ekiti communities. The style was novel and the village square meeting was strange to the people who were used to empty promises in the past. He told them to choose three priority projects that each community wanted included in the budget of the following year and they did. At least one of the projects chosen by each community was included in the following year’s budget (2012).

The people became more interested in the pre-budget village square meeting in 2012 against the 2013 budget. He repeated the meeting with all Ekiti State communities in 2012 and more projects were executed in the communities in 2013 such that by the end of this year, over 1,600 projects are either completed or on-going in many communities. The village square meetings have become so popular and believable that the monarchs and their subjects in all Ekiti communities now look forward to it as a sure way of getting projects sited in their town or village. Another project that has worked like magic in the communities is the State Assisted Community Projects Initiatives (SACPI) which the governor introduced in June 2013 whereby funds were released to Community Development Associations to complete projects in their communities. Such community projects are Civic Centres and Kings’ palaces as the case may be. Most of these projects have been on for years and many have been abandoned due to lack of funds despite yearly celebration of ‘towns’ days’ to raise funds. N600 million has been distributed to execute 176 SACPI projects.

The effect of the SACPI on the communities was unimaginable and this came to the fore when the governor embarked on this year’s pre-budget village square meetings making it the third since he assumed office. No wonder, governor Mimiko of  neighboring Ondo state recently adopted the programme. This year’s edition which took place in the month of November as usual was unique in many ways most especially because the governor visited 130 communities out of the 131 in the state as against the usual practice of meeting the town representatives at the local government headquarters. The governor walked in the midst of the people to inspect and commission projects.

The tour was a confirmation that Governor Fayemi is a man of his words and thus a restoration of trust in governance; it was an avenue to commission many of the projects which had been completed especially the State Community Assisted Projects which were completed in just six months by the communities after receiving grants from the State government; it enabled the governor to know how his administration was perceived by the ordinary people in the communities; it revealed what amenities the people are lacking as some demands are common to all the communities; it is a stock staking exercise. As a restoration of trust in governance, all the communities visited thanked the governor for projects executed based on their demands during the previous village square meetings. There is no community visited in Ekiti state that did not thank the governor for at least two projects that have been executed before making further requests.

The governor commissioned 85 of such projects that were ready while others are still ongoing. In some communities, as many as three projects were commissioned. The most interesting of this is the speed with which the communities completed their projects, using their own local contractors supervised by the town union representatives and monitored by the Ministry of Rural Development and empowerment. The money given to the communities were judiciously spent going by the standard of the Civic Centers and palaces completed. The governor commended them for this.
The 2013 meeting with the communities enabled the governor to know how his administration was perceived by the ordinary people in the communities. He was well received with pomp and pageantry as some brought out masquerades to welcome and entertain him and his entourage. In many of the communities, the monarch prayed for the governor after the town’s representative might have spoken to thank the governor for projects and new requests. Even though it was a pre-budget tour, the people of the communities did not fail to show appreciation to the governor whom they describe in superlatives such as Omoluabi (a thorough bred), owibee sebee (promise keeper) asaaju to se gbekele (a dependable leader) etc. and urged him to continue in office for second term so that he can continue his good works. Many traditional rulers openly called on their people to vote the governor for another term even though he constantly reminded them that he was not on a campaign tour but a pre-budget visit. The Olosin of Osin Ekiti gave him the acronym, Arole Awolowo (Chief Obafemi Awolowo’s successor) while the Alaworoko of Iworoko Ekiti called him Akobi Awolowo (Awolowo’s first child).

The reason for the two nicknames according to the monarchs is that Dr. Kayode Fayemi through his leadership styles, have done development to the people such as Chief Obafemi Awolowo did in the old Western Region in terms of infrastructure, free and qualitative  education, health care delivery and creation of employment. In many towns, the traditional rulers said that the governor was the first to visit them since the towns were founded while in others, he was the first governor to ever execute and commission any project in their town.  There was a mild drama at Ido-Ile where the monarch was angry with the governor for ‘stressing’ himself going round the communities when he didn’t need to as his good works have spoken for him. The monarch said that the compendium which contained the projects in all Ekiti communities and which has been widely circulated is enough for all to know that the governor has done well!
The meeting afforded the governor the opportunity to know what the people of the communities lack. For instance, it was revealed that despite the giant strides and ceaseless efforts of the governor in the provision of potable water (5 mini water works were constructed and commissioned in 2012), as many as 45 communities complained about lack of potable water. This is because almost all the pipes in the state which were laid since 1960s have rusted and new pipes are been laid all over the state in the last three years. Apart from this, the major dams in the state like Ureje, Ero, Egbe and Itapaji are undergoing major repairs and would be connected to the various pipes as soon as possible. This is why water is a major priority in next year’s budget. Sinking of boreholes was approved for about 18 communities with acute water shortage as an interim measure. Some communities also demanded for transformers and this would be accommodated in the 2014 budget even though matters of electricity are federal. The government has purchased and distributed over 100 transformers so far.

The most popular programme of the governor over which he received thanks, gifts and prayers from old men and women is the social security for the elderly where they earn a N5, 000 stipends monthly which has been understudied and adopted by four other states in Nigeria. He also received the praises and commendation from virtually all communities over the renovation of all secondary schools; free education and distributing laptops to secondary students; ongoing renovation of all General Hospitals; youth volunteers who earn N10,000 monthly, free health mission which had been done a record seven times and have benefited about 363,050 Ekiti citizens, free health mission for traditional rulers ,their households and chiefs called Ilera Laafin; new cars for the traditional rulers; recruitment into government agencies such as EKSTMA, Peace Corps and Fire Services; the Conditional Cash Transfer where vulnerable women are given N5,000 monthly stipend. Of course, most communities thanked the governor for fixing their roads both at the state and local government levels.

Many roads that have become impassable over the years in the state have been fixed and the communities which the roads passed through are very grateful. The 5km per local government project whereby a total of 81.2km of roads have been constructed across the communities in the 16 LGAs and a large chunk of Ekiti communities have benefitted from this while a total of 902 kilometers of Federal, State and Local Government roads have been rehabilitated, reconstructed and constructed. The few communities that did not benefit from the 5km project have been accommodated in the next phase in 2014 budget which is over 91 kilometres. Another important point to note is the appreciation from communities where the governor had resuscitated moribund state owned companies such as Ire burnt bricks in Ire-Ekiti and Road Materials Company (ROMACO) in Igbemo-Ekiti.

The people of Ikogosi were too happy to receive the governor because of the way he has transformed Ikogosi Warm Springs resort from an abode of reptiles to a world class resort centre which has  become a reference point in the tourism industry.  The communities believed in the efforts of the government to revive agriculture as attested to by the fact that Ekiti has the highest yield in cassava in Nigeria for this year. Some communities donated land to the government for commercial agriculture so that the youths of such towns could also benefit from the Youths in Commercial Agriculture Development (YCAD). The governor preached peace in all the communities he visited. In spite of the meager resources of the state, the governor has been able to do a lot of things such that the Ewi of Ado-Ekiti, Oba Adeyemo Adejugbe called him a magician during his pre-budget tour of Ado-Ekiti. Presently, the State Mega Pavillion which is like the Eagle Square in Abuja is nearing completion, the new Government House is ongoing as well as the Ultra modern  Civic Centre.

Some indices of development in Ekiti state explained why the governor was well received by Ekiti communities during the pre budget meeting. According to the Human Development Report (2012), Ekiti is described as the most conducive environment to live for long and healthy living with a life expectancy average of 55 years. Ekiti has the lowest infant and maternal mortality rate and the lowest HIV/AIDS infection in the country. The State has the highest pupil enrolment and the least out-of-school children in Nigeria. The governor bagged the Governor of the year award by Leadership newspapers in 2012, the SAMSUNG Awards as the best Governor in Africa that invested in Education, the ZIK Leadership award in 2013 and recently, he bagged Good Governance award from the Nigerian/American Chamber of Commerce. In September 2013, the governor was invited to the United Nations session on the basis that his state, Ekiti has met many of the Millineum Development Goals (MDGs). The village square meeting is so magical and infectious that Governor Ibikunle Amosun of Ogun State has adopted it.

This article was first published in The Nation on Wednesday, January 22nd, 2014.