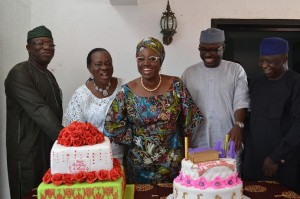 Ekiti State Deputy Governor, Prof Modupe Adelabu has listed the release of the 237 Chibok Government Secondary School girls and the peaceful conduct of the June 21 governorship election in Ekiti State as her birthday wishes.

She spoke shortly after a dawn thanksgiving service organized at the Chapel at the Deputy Governor’s Lodge on Friday as part of activities to mark the 64th  anniversary of her birthday.
The service presided over by the Regional Overseer of the Mountain of Fire and Miracles (MFM) Ministry in Ado Ekiti,  Pastor Olumide Adebayo, was the first of a three-legged programme drawn up to mark the birthday.
Another service in which the Pastor-in-Charge of Ekiti Province I, Redeemed Christian Church of God (RCCG), Ado-Ekiti, Pastor Ola Adejube, was organized in honour of the deputy governor in her office by members of staff.
Both clerics reiterated the need for Christians to cultivate the attitude of thanksgiving, praise and worship. They said reminded audience that birthday celebration was to renew covenant with God.
Those who spoke glowingly of the deputy governor included: Governor Kayode Fayemi, his wife, Bisi, former Governor Adeniyi Adebayo, Speaker, Ekiti State House of Assembly, Dr Adetunji Omirin, Secretary to the State Government (SSG), Dr. Ganiyu Owolabi and the Permanent Secretary in the Deputy Governor’s Office, Mr Babatunde Alokan.
Among those who graced the reception which dropped the curtain on the celebration were: Head of Service (HoS), Bunmi Famosaya, Special Adviser to Ekiti State Governor on Special Duties, Chief Babtunde Odetola and Senator Babfemi Ojudu.
In his comment, Governor Fayemi described his deputy as very spiritual and dedicated person.
When asked to say something about the celelebrator, Fayemi said: “Well, she is a beautiful woman inside out.  She is a very spiritual person, very dedicated to her work. I’m very proud of her wise counsels in the business of governance.
“My wishes for her are that she will grow from strength to strength and more in God’s grace and wisdom. Add more years in good health and blessings and we will all be here to celebrate with her next year.”
The governor’s wife said she was happy to celebrate the deputy governor who she described as an amazing woman.
Her words: “She is an amazing woman, a woman of virtue; a wonderful woman; a great mother and an outstanding citizen of this state. I pray the almighty God will continue to bless her. I want to encourage every indigene of Ekiti State to emulate her.”
The SSG descrided her as a source of inspiration to those coming behind her and said that the deputy governor was humility personified.
Former governor Adebayo advised the deputy governor to tread softly and pray God to preserve her life.