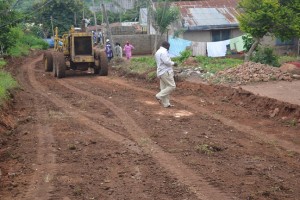 A tractor at work on Palm Groove Road, Ado-Ekiti.

Roads in no fewer than five streets in each of the 13 Wards within Ado-Ekiti, the Ekiti State capital are to be upgraded, it was learnt yesterday.

When rehabilitated, the roads will create a ring around the city, reduce travel time and take traffic pressure off the major roads.
The roads are to be graded as part of efforts to link major streets in the metropolis with suburb communities in the city. The infrastructure upgrade is at the instance of the Deputy Governor, Prof Modupe Adelabu with the governor’s approval.
Already, some residents, whose communities have been given the face-lift, described how the grading of their roads brought them out of the corridor and said the development will improve their socio-economic status.
They also urged the government to construct drainage as a way of preserving the rehabilitated roads, which include: Palm Groove (Agric Olope) at the Odo-Ado area of the capital city; Odo-Obun; and Wohem Avenue, near Fajuyi Housing Estate, on Ilawe-Ekiti Road.
A resident on Odo-Obun street told reporters that the rehabilitation has ended the stress of having to go out through the longer route.
Those who spoke on the on-going road rehabilitation at Palm Groove described the intervention as laudable and timely. They included: Mr Ajibade Fashola, Mr Olaiya Ilugbusi and Pastor Ajayi Peters among others.
The site supervisor, Mr. Ojo Fatuase said the deputy governor mobilized the grading machine to the listed streets shortly after she met with the landlord associations from the affected communities.
He said the mandate given to him by the deputy governor was to make tenements accessible to residents in vehicles, tricycles and commercial motor-cycles.