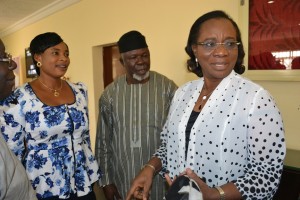 Ekiti State Deputy Governor, Prof. Modupe Adelabu (right) chatting with the Chairman of the state Civil Service Commission Alhaji Afolabi Ogunlayi (middle) and Chief Kemi Olaleye, the Commissioner I after their meeting with the deputy governor in Ado-Ekiti.

Ekiti State Government yesterday reiterated its commitment to reform and transform the state to enviable height by building a virile and pro-active civil service.

Renewing the commitment while receiving the Board Members and Management of the State Civil Service Commission in her office in Ado-Ekiti, Deputy Governor Prof Modupe Adelabu said the administration of Governor Kayode Fayemi recognized the civil service as the heartbeat of the government.

According to her, the administration has a plan to revitalize the service as the vehicle to deliver on its Eight-Point Agenda.

She explained that certain aspects of the good governance and human capital development of the government’s policy have been strategically designed to cater for what the civil service needs to make it function properly.

Prof Adelabu who described the Civil Service Commission Chairman, Alhaji Afolabi Ogunlayi, the board members and the management of the commission as a bunch of seasoned technocrats acknowledged the reformation that has taken place in the commission since their appointment.

She urged the commission to look inward and facilitate internal and external training, workshops and programmes that will build the capacity of workers and further make them more effective and efficient in their duties.

In his earlier remarks, Alhaji Ogunlayi explained that the commission has the mandate to employ, promote and discipline civil servants.

Besides, he listed workers’ welfare and the smooth running of the civil service as parts of the briefs of the commission.

Going back the memory lane, he told the deputy governor that the present administration inherited a commission in shambles with many vital issues such as workers promotion, advancement, complaints among others left unattended to, noting that such situation led to very low spirit among the civil servants.

The commission chairman also disclosed that the embargo placed on appointment into the civil service long before the administration came on board has been lifted by the governor and recruitment exercises are currently on to fill all consequential and other existing vacancies in all ministries, departments and agencies, while the 2012 and 2013 promotion examination will be conducted and letters issued to beneficiaries before the end of the year to put stop to notional promotion syndrome in Ekiti civil service.

He assured that all arrangements have been concluded to ensure that the civil service, being the engine room of government, becomes vibrant again to enhance the good governance agenda of the present administration.