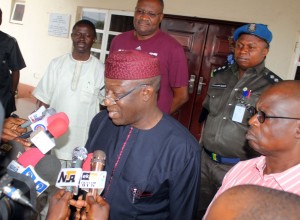 Ekiti State Governor, Dr Kayode Fayemi has described Sunday’s police assault on his convoy as an attempted ploy to assassinate him.

The Governor while speaking to journalists in Ado- Ekiti on Monday said the deliberate attack by the men of the Mobile Police led by Gabriel Selekere which led to the death of Taiwo Akinola was an assault on the government and people of Ekiti State.

Dr. Fayemi who disclosed that he was going to Abuja to take up the issue with President Goodluck Jonathan and the Inspector General of Police on the appropriate steps to be taken on the assault expressed worry at the irresponsibility of the Police in handling the security of citizens.

He opined that the President and Chiefs of security agencies in the country will not want the peace of Ekiti to be disturbed by any unruly behaviour  on the path of law enforcement agents.

“I am still trying to understand what happened. My immediate interpretation is that there was an assault on the government and people of Ekiti State. If one were to be extreme in one’s interpretation, it could even go as far as saying it was an assassination attempt against the governor of the State. That’s why I am going to Abuja to see Mr President and the IG right away. So I wouldn’t want to jump to any conclusion. I have spoken to the relevant people in authority and I believe appropriate steps will be taken.

“ The peace that this State has enjoyed in the last three and a half years must be sustained, and I will like to think that all in authority right from Mr President to the Chiefs of the Security agencies will not want the peace and tranquillity of Ekiti to be in any way disturbed by irresponsible behaviour on the path of law enforcement agents”, he said.

While further reflecting on the attack, the Governor said it was a ploy to intimidate Ekiti people so that they wont come out and vote on election day; adding that no amount of intimidation can cow the very “resilient and determined people’ of the State out of exercising their civic right.

He urged the people of the State not to be deterred by anything even as he said some youths have continued their campaigns despite the ugly incident on Sunday.

He said: “My word of encouragement is that this will not deter our  people. Our people are resilient, determined and they will vote in this election. If their agenda here was to ensure that our people are intimidated and cowed into staying at home so as not to come out on
the day of election, then it has failed because our campaigns will go on. This morning, I believe the youths are on the street. We shall not be intimidated by this because it is about the mandate of the people, and for now, we are the one holding then mandate and we will protect
the mandate with everything, every fibre in us”.

On the harassment of journalists by security agents at the scene of the incident, Governor Fayemi said it was an undemocratic and sad for any security agent to prevent the media from reporting any events which have to do with the safety of lives and property of citizens.

The Governor who expressed worry that the State is gradually relapsing into the era of “one day, one bloodletting in Ekiti” barely two weeks into the elections called for a multilevel security structure which can effectively respond to the challenge of insecurity in Nigeria.

Fayemi who said he was not particular about the removal or otherwise of any police officer from the State urged the authority of the Nigeria Police to investigate the situation and take appropriate steps in the interest of the peace of the State.

“I don’t know of any where in this country where you have experienced what we experienced yesterday. Unprovoked attack, innocent citizens, even the Chief Security Officer of the State, these take us back to the debate that we have consistently insisted on that unless you have
a multilevel security structure, you cannot respond to the challenge of insecurity in Nigeria because this bad behaviour has to be addressed and I will like to think that those in authority will have to do their best to address the issue.

“We are not particular about the removal of any police officer being in Ekiti or being removed. However when you have a situation in which a police officer exhibits consistent blatant bias in the discharge of his duty, then clearly the authorities themselves should do the
needful. They know what to do when that is the situation. In the case of the OC MOPOL who was there yesterday ordering the tear gassing of my convoy, I believe the authorities will take the appropriate measures. I don’t want to dwell on individuals. I think it is the structure of policing itself that we should address; that is what could make it possible for a low rank office – a superintendent of police to behave this badly”, he said.