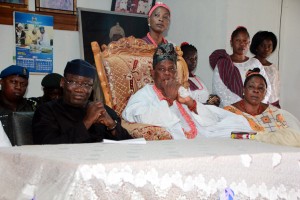 In furtherance of the commitment of his administration to participatory governance, Ekiti State Governor, Dr Kayode Fayemi, on Friday kick started his annual tour of Ekiti communities/ town hall meetings ahead of the 2014 budget preparations with many of the communities erupting in jubilation as they welcome the Governor to their communities.

Unlike the previous editions of the town hall meetings where all communities in each of the 16 local government areas of the state would converge on a location at the LGA headquarter, to make their needs known to the Governor, the current edition is held in each community of the council.

The Governor had visited and held town hall meetings in about ten communities in the first day of the tour. These include : Ilasa, Ikun Oba, Araromi Oke, Eda Ile, Kota Ekiti, Omuo Oke, Ayegunle-Ahan, Isinbode and Omuo Ekiti. The leaders of the communities also presented their areas of priorities to the Governor for inclusion in the 2014 appropriation.

Speaking during the meetings at Ekiti East Local Government, Governor Fayemi said the meeting was imperative so as to feel the people’s impulse, get their inputs for the preparation of the 2014 appropriation bill and inspect community projects.

Fayemi who inaugurated some  projects including a civic centre, a block of health workers quarters and a community viewing centre at Ikun-Oba, Eda Ile and Araromi-Oke respectively, also inspected some self-help projects for which the State Government recently disbursed N600 million as grants-in-aid to the communities.

The Governor, while responding to the various requests of the communities which ranged from autonomy to other basic amenities, assured them of the inclusion of many of the requests in the budgeting process.

On the request made by Araromi-Ugbeshi for autonomy, Fayemi urged the leaders of the community to follow due process by approaching the Council of Traditional Rulers in the State, a body which is empowered to make recommendations to the Governor before autonomy is granted.

At Omuo Oke, the Governor explained that the delay in the construction of the trailer park was not unconnected to the ongoing review of the design for the park but assured that the contractor handling the project would soon return there for a befitting job.

He reiterated his commitment to reconstructing boundary roads leading to the state so as to boost the socio-economic life of the people.

They expressed their appreciation for the sincerity demonstrated by the government adding that those things they asked for in the 2012 edition of the Town hall meetings had already being completed or about being completed.

The Governor was accompanied by members of his cabinet who took turn to take note of requests that are related to their respective ministries.