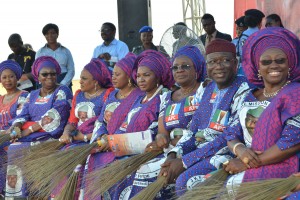 Delegates to the event cut across women professional bodies and associations, artisans, APC loyalists across the 16 Local Government Areas of the state, market women and female chiefs, faith based women organizations, civil society organizations, as well as representatives of teachers.

The governor used the opportunity to take stock of his achievements in the last three years, especially on women affairs; while he renewed his commitment to the promotion of women wellbeing and advancement.

More than 200 women from major opposition parties used the occasion to formally announce their defection to the All Progressives Congress.

The defectors were led by a former Commissioner in the State Universal Basic Education Board, Erelu Iyabo Babatunde, who served under the administration of former Governor Ayo Fayose; as well as Mrs. Omotunde Fajuyi, another Peoples Democratic Party stalwart.

They were received by the State Chairman of the APC, Chief Jide Awe; and State Women Leader, Chief Funke Owoseni, who urged the newcomers to woo more members into the APC from their old parties.

It was an occasion for speakers, including wives of governors to drum support for the re-election bid of Fayemi, who also said that his achievements stand him in good stead to win the June 21 election.

In his address, Fayemi stated that his administration has carried out various gender empowerment programmes and policies which have enabled Ekiti women stand shoulder higher than their counterparts from other States.

Dr Fayemi who signed the State’s Gender-based Violence Prohibition law in 2011, Nigeria’s first and only law protecting women against abuse from men and Equal Opportunity law 2014, said Ekiti women now have dignity more than ever.

He stressed that it is no coincidence that Ekiti state has the lowest out-of-school girls percentage, lowest maternal and child mortality and highest life expectancy for women in the country.

” In 2007, I outlined a number of steps that our government would take if voted in, in the interest of women and enactment of law that will protect the dignity of women. We have advanced the course of women in education, politics, right based development. There is no doubt that wherever you go, Ekiti women know that life has changed for the better and that this government has served them in meeting their yearnings. Ekiti now has the lowest rate of maternal and child mortality in Nigeria, Ekiti has the lowest out of school girls, our elderly women can boast of highest life expectancy in the country”, Fayemi reviews.

While stating that any investment in women is not a waste, the Governor said women are very perceptive of progress and development and as such when a woman is empowered, a whole community is indirectly empowered.

Fayemi, while urging the women to rally support for his re-election so that he can consolidate on the gains that women have made from his government, assured that women would henceforth got more participation in political decision to the tune of 40%.

The governor who stated that 52% of registered voters in Ekiti State are women expressed optimism that with the support of women, he is sure to coast home to victory in the June 21 guber poll.

He urged them to keep their voters cards intact and turn up on Election Day to re-elect him for the good works to continue.

Meanwhile hundreds of supporters of the Peoples Democratic Party (PDP) in the State have dumped the party for the APC ahead of the coming election.

Leading other defectors, a PDP stalwart and former Commissioner in the State Universal Basic Education Board (SUBEB) in the Segun Oni era, Chief Iyabo Babatunde said the decision to join the APC is not unconnected to the transformational strides of the Fayemi-led government in the State.