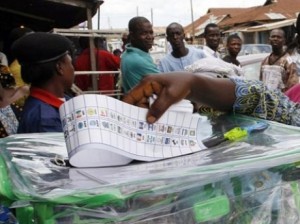 Nigerian electoral politics has come under severe attacks since inception. Right from the First Republic where E. E. Esua held forte, to the present fad of handing over the electoral umpire office to the hands of a professoriate, electoral politics has always been a fierce battle of survival. It is even more consuming a battle now with the hopelessness that pervades the land and the Heaven’s Gate role of politics in the lives of the despondent people of the land.

For politics holds the key to the gate of heaven in Nigeria. While virtually all professions and professionals are going through privations of surviving the harsh time in Nigeria, politics as a vocation is waxing stronger and those who invest their lifetime in it are surmounting the harsh weather of the time. This is why there is a heavy migration to the vocation of politics. It is one investment which, if well made, holds the promise of giving returns in hyper-multiple fold.

And so, all manner of people increase the traffic. Scallywags, touts, leeches, the dumb and the deaf to changes in the globe and all manner of people all queue on the road of politics. It is a vocation where you don’t go to school but you become a professor within a short while. Those who begin their journey in life pursuing the kingdom of wealth eventually veer into politics, not so much because of the money that it has the tendency to give them, nor its enormous wealth but the power of life and death it confers.

If you are driven by the thirst for service, if you are such who has so much to contribute to your society, you will spar with all manner of scoundrels. It is there that you have flotsam and jetsam of society elbowing their ways out with those who have requisite knowledge and experience. Touts jam professors; leeches jam the prudent; patriots elbow scoundrels. And the turf seems seamless and the dramatis personae indistinguishable from one another.

I have followed Ekiti politics for a while now. To be sincere, it is pretty much like what obtains in any Third World country. It is essentially a politics of the stomach. It is a politics where issues seldom have a place but where plenty emotions come to the fore. Anyone who has visited Ekiti in the last few years of Governor Kayode Fayemi’s reign should ordinarily not have any measure of compunction in deciding where the pendulum of the June 21 election in the state will swing. Here is an urbane, well-read, articulate and patriotic citizen of the Fountain of Knowledge who has lifted the profile of the state from a junkyard that it was hitherto.
ADVERTISEMENT

I have equally surveyed the political landscape in the state with an eagle eye. When I hear some commentaries run by some persons on the candidature of some persons other than Fayemi, I squirm real good. Why would any sane man leave eczema and begin a rigorous treatment of leprosy? The difference between Fayemi and his fellow contenders is as long as a filament. I know of candidates who would be governor and Ekiti would return to its old typecast as a land of brigandage and dishonor. Some years ago, I was at a forum where some governors were discussing one of the present contenders for the office of the governor of the state. Even though I do not hail from the state, I was ashamed that the profiling of the state helmsman, even among his colleagues, was debasing and less-than-befitting for a state that prides itself as a fountain of knowledge. You would think the governors were discussing a tout in a motor-park.

Fayemi, to my mind, fits the projection of Ekiti as a fountain of knowledge. One of his co-contenders would again drag back the name of the state and cast a slur on the name of a state that Fayemi has built as a beacon of hope, having no scandal associated with his name or that of his government in the last three and half years. Others range from vendetta-seeker, the scoundrel to the novice.

Ekiti people are enlightened and knowledgeable. The dis-advertisement that not voting Fayemi into the Government House next week portends for Ekiti is grievous. I am not a party man and have my disdain for all political parties in Nigeria. I have demonstrated on this column my disdain for the government of Goodluck Jonathan which I, like millions of Nigerians, think is bereft of quality and adequate mental leadership that we require. When I heard the bunkum that the president was reputed to have spewed on the podium in Ekiti during the week, I recoil into my shell. When the president of a country says he would only begin to “favour” a state with development when he plants a fellow leader whose elan is reputed to be at par with his, then Ekiti people have a lot to worry about if they travel towards that barren road again.

Let me warn that it would be calamity for us as a people and for Ekiti State if the Saturday election is rigged in favour of anyone. Not even for Fayemi! I have done extensive study on the Second Republic, especially in the old Ondo State. The bulk of the violence and arson of the period came from the long-suffering Ekiti people in the state who could not stomach the injustice of snatching their votes. Federal might of abetting violence can only act as tinder that won’t be funny at all.

I vote for the reformer, the intellectual in politics, the man who has shown the way of development to the people of Ekiti – John Kayode Fayemi. No apologies, please.

This article was first published in the Tribune on June 14, 2014.