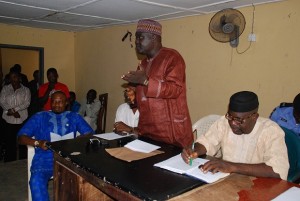 Local government employees across the sixteen local government areas in Ekiti State have were yesterday assured of the payment of their outstanding areas and the implementation of their promotion by Governor Kayode Fayemi.
The Special Adviser, Deputy Governor’s Office, Mr. Bamitale Oguntoyinbo, who gave the assurance during an interactive meeting with workers at the Oye Local Government Area, Oye-Ekiti, also allayed the fear that the state government was planning to lay off workers.

The meeting which was held at the secretariat of the Oye Local Government Area, provided a forum for the staff to rub minds with the former council chief on problems confronting them.
Mr. Oguntoyinbo assured them that Governor Fayemi has no plan to sack any local government worker, adding that they should not listen to negative rumours been peddled about by enemies of the government.

The special adviser said that rather than sack the workers, the Fayemi-led administration has a plan to create more employment opportunities with the proposed creation of more Local Government Development Councils (LCDAs).
According to him, the LCDAs when created will stimulate rapid development of the grassroots and bring governance to doorsteps of the people.
He said the on-going restructuring in the local government was necessary and staff redeployment to the teaching service is in their own best interest as they are placed on the appropriate level and now earn more than when they were at the local government.

Responding to questions on the outstanding areas and pending promotions, Mr. Oguntoyinbo said efforts are on top gear to address it at the appropriate quarters.
He stressed the need for the staff of Oye Local Government origin to give their unalloyed support to Fayemi’s second term ambition, being a man of their own.
Some of the workers in their remarks lauded the governor for being a man of his words and for the various achievements attained by administration.
They assured him of their support in the fourth coming governorship election.