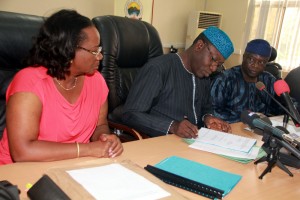 Ekiti State Governor, Dr Kayode Fayemi, has stated that the creation 19 new Local Council Development Areas (LCDAs) in the State is not a political trap contrary to insinuations from the Peoples Democratic Party that it is an attempt to destabilize the successive administration.

The Governor stated this in Ado – Ekiti on Wednesday while signing into law the Bill for the Creation of Local Government Areas (2014) following its passage by the State House of Assembly.

The State House of Assembly had ratified the outcome of the referendum conducted by the State Independent Electoral Commission (SIEC), where the people of the state expressed their support for the creation of the new councils.

Governor Fayemi, at the signing ceremony witnessed by members of the state Assembly and state executive council, asserted that the creation of the new councils was not only a fulfilment of the yearnings of the people but also an exercise in accordance to the nation’s Constitution.

He stressed that the present administration has finally fulfilled the aspiration of Ekiti people on council creation. He said that the demand for new councils has always topped the list of requests by many communities during his annual Town Hall and Village Square meetings in Ekiti communities in 2011, 2012 and 2013.

Fayemi said: “This is a promise fulfilled following the yearnings of Ekiti people, yearnings that predated the commencement of our time in office on October 2010. We will all recall that the first executive governor of this State had attempted to create new local government areas before the end of his tenure in office. That was not to be. But our people never stopped requesting for additional local governments in order to bring development closer to them.

“This is not a political trap for anyone, I must say that. This is without prejudice to whatever transition arrangements that are being put in place because these are minimum irreducible demands of Ekiti people. What we have done is simply fulfil the yearnings of our people, and we hope that succeeding administrations in the state will build on this effort”, the Governor explained.

According to the Governor, the new local government areas will come into immediate effect in all the areas affected “following necessary assets sharing and the necessary implementation of administrative responsibility”.

Fayemi who stated that new transitional political leadership will be appointed for the council assured that the present administration “will do everything within the constitutional ambit to ensure the effective functioning of these councils till the end of this tenure in October”.

The Governor commended the Justice Akin Ajakaye-led committee that worked on the council creation, the State Independent Electoral Commission (EKSIEC) and the State House of Assembly for their selfless efforts in ensuring that the yearnings of the people were finally actualized.

Earlier in his remarks, the Speaker of the State House of Assembly, Dr Adewale Omirin said the signing of the Council Creation bill into law is aimed at promoting rural growth and development of the people.

The Speaker added that criticisms from any quarters will not distract the Assembly from performing its duties, especially when it has to do with allowing the masses enjoy the dividends of democracy.

“We see this as one of the best ideas for development in our State and we believe that politicians who do not move against direction do not have any business in any government. This is why the criticism by the opposition will not distract us from the path to create development channel for our people through the government that is closer to them, to enable them enjoy government, development and growth in the rural communities. We have seen the effect this is yielding in other states of the federation such as Lagos State”, Omirin said.

Many of the communities in the newly created council areas, it was gathered, had donated buildings to house the new council headquarters, while arrangements had reached advanced stage for the deployment of core staff to the new councils.