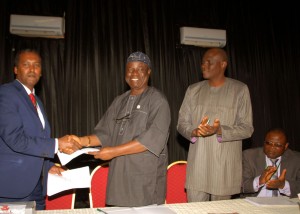 The vision of the Ekiti State to modernize agriculture and become the food hub of the southwest by 2014 has received a boost as the State Government on Wednesday signed a Memorandum of Understanding with three Agriculture and financial institutions.
The three institutions are world-class agricultural implements Manufacturer, Agricultural Company (AGCO), Dutch Agricultural Development and Trading Company (DADTCO) and the Bank of Agric.

Signing the MoU at the closing of the first edition of  Agbeloba Agricbusines Forum in Ikogosi Ekiti, the investors said their willingness to partner with the State was informed by “the seriousness of the government” in the pursuit of its vision to provide food security, generate at least 50% of its revenue and combat the menace of unemployment through the agric sector.

The Managing Director of AGCO for Africa and the Middle East, Mr Ousmane Nurudeen who signed the agreement on behalf of his company noted that the role of modern technology in actualizing the goals of government cannot be overemphasized and this is responsible for the training of young farmers in the use of the machines.

Nurudeen added that although AGCO does not train end-users of its products, the company in fulfilment of its commitment has trained 36 youths in the use of modern agric machines, which he said is the difference between “a good farmer and a bad farmer”.

He asserted that the company aside from providing machines for the initiative will also engage in knowledge impartation on how the implements are used for fast agric transformation.

Speaking for the Bank of Agriculture, the Managing Director of the bank, Dr Mohammed Santuraki, expressed delight at the gesture of the state government in organizing the Agbeloba Agribusiness Forum, which he said is coming at a time the country is facing a crisis in the sector; saying that he had seen the “seriousness of Ekiti State Government” since he came around for the Forum.

Santuraki said the Understanding being signed will see to the contribution of N300 million each by the government and the Bank in the first phase of the agreement which was originally designed to raise N1 Billion loan for farmers, while the Bank will also support the State’s YCAD programme with another N200 million.

He stressed that the agric sector requires special funding because of its socio-economic impact.

Also speaking, the representative of DADTCO, Mr Peter Bolt said his company will support the State Government to drive the business aspect of the agric initiative so as to generate the revenue that government desires.

It could be recalled that Ekiti State has attracted investments in the sector to the tune of $300 million in the last two years.

Earlier, the Commissioner for Agriculture and Natural Resources, Mr Babajide Arowosafe said the focus of the State is to modernize agriculture and use it as a platform for job creation and revenue generation.

The Commissioner added that government has in the last two years created an enabling environment for the State to take the lead in agric production and the efforts are yielding fruits.