Featured, NewsLeadership:We Must Begin To Mentor Our Youths – Fayemi

Leadership:We Must Begin To Mentor Our Youths – Fayemi 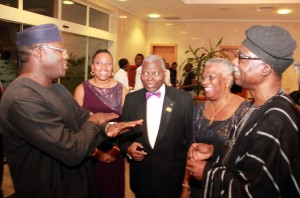 Ekiti State Governor, Dr Kayode Fayemi at the weekend said Nigerian leaders across all walks of life must begin to mentor young people and help them build a future that they will be proud of.

Speaking at the Annual Awards night of the Nigerian Leadership Initiative (NLI) held in Lagos, the Governor stated that any truly transformative movement in Nigeria’s current national circumstances has to be youth driven because 70% of the country’s population is less than 35 years.

Dr Fayemi stressed that the population means that young Nigerians have the greatest stake in “the political dynamics now shaping the country’s way forward in the next decade and beyond” as they will bear the consequences of the politics and policies of the present time in future.

“The youth are the constituency most affected by the policy measures of today’s government. This should make them a politically active constituency, far more engaged in public affairs, and a bloc influential enough to be courted by politicians. But this is not the case”, he said.

While asserting that young Nigerians frequently complain of being marginalized and alienated from mainstream politics and governance, the Governor affirmed that the youths have a compelling case even as the nation’s political system is still being operated by “old guard political elites who tend to depreciate the skills and records of the younger generation in ways that suggest that only their generation of veterans possess the talent and nous to move the country forward”.

This, according to Fayemi, has made the youth see politics as a dirty game played by mean spirited old people who “simply do not care about the legacy and inheritance they are leaving behind”.

He asserted that leaders have the responsibility to boost the next generation up on their shoulders and also realise that whatever successes they have are incomplete until the grounds for succession is well prepared.

The Governor who disclosed that one of his aims in public life has been to demystify leadership and ensure a shift away from seeing leaders as messiahs stressed that leadership should not be reduced to holding political offices.

Fayemi therefore charged the youth to find spaces and environments in which they can best exploit their leadership potential for success, adding that leadership so about the quest for something that transcends personal gains.

In his remarks, the co-founder of NLI, Dr Christopher Kolade urged youths to rise up and surmount challenges that hinder them from exploiting their leadership potentials, saying that the country cannot afford to let her youth population waste away.