Featured, Features, NewsKayode Fayemi: A Note From The Campaign Trail (2)

Kayode Fayemi: A Note From The Campaign Trail (2) 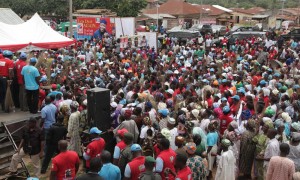 The crowd that came to receive the All Progressives Congress, APC, Governorship Flag bearer, Dr Kayode Fayemi, during a campaign tour of Odo-Ayedun, Ikole LGA.

Now kitted with an official car and a driver, who, probably could become maniacal on the road if need be, and a photographer to boot, courtesy of the Chief Press Secretary, YinkaOyebode, I was ready to roll. I finally had my first tete-a-tete with Governor KayodeFayemi after the day’s campaign at around 8 pm, the following day of my arrival. I shared my little campaign experience so far with the governor. He said a few things about his campaign, the coming election and Abuja meddlesomeness. Then our discourse suddenly veered off-course.

In a classical moment of serendipity, the governor and I both discovered that we hadlived in close proximity with each other in the same community outside Nigeria without being aware. This new awareness of having lived in the same community was of course before the governor became a known face to many Nigerians in the Diaspora, including yours truly, at different hotel lobbies and rooms when in the company of Asiwaju and his regular quartet of Dele Alake, RaufAregbesola, Tunji Bello, and Kunmi Fakaiyein the United States during the struggle to reclaim his and Aregbesola’selectoral mandates. We had lived in the city of Evanston, home to Northwestern University in the State of Illinois in the US about the same time. He was at the University as a visiting professor while I was living on Hinman Avenue, a 5-minute drive to the university campus. We may have unknowingly elbowed each other at the campus not because I was a student of the university, but because the university library and other places where students congregated were drop-off points for my newspaper publication called “The African Voice.” “Ah, I know your newspaper. I used to pick it up on campus,” the governor enthused. It was such a rewarding feeling for me, sitting in front of a chief of state who remembered my professional endeavor that happened across the Atlantic more than a decade ago

“Your Excellency, something struck me yesterday at the stadium as I was scouting for you. I saw this critical mass of women collectively being called “ObirinKete” that I was told was your wife’s idea. There seems to be something “Clintonisque” about you and your wife. There’s this Clintonian streak in you and the First Lady of Ekiti State,” I said. “Minus Monika Lewinsky, you know,” the governor interjected. And we both laughed. “You see, I always tell Ekiti people that they’re getting two for the price of one,” he added. “My wife will be visiting the farmsteads in Ekiti tomorrow. It might be a good idea to take a look at what she’s been doing in those farmsteads,” he advised. “I like to do that, your Excellency.” “Come to the (Governor’s) Lodge tomorrow. Come around 8 so you can join them.” The visit to the farmsteads was a full, eye-opening, dawn to dusk engagement that cemented my hunch that Nigeria’s Hillary Clinton may be emerging in EreluBisiAdeleye-Fayemi. There will be more on this in the subsequent parts of this campaign odyssey.

Now integrated into the more sane section of the governor’s campaign convoy, Iropora-Ekiti was our first stop. We drove into an open school field where a significant mass of people were having revelry of a different kind. It was the ubiquitous Owambe party. Although, it was a Thursday, it now made sense to me why the governor left his lodge in a leisurely garb. He was clad not in his usual campaign costume of jeans trouser, a logoed-polo shirt, a fez-cap and a broom, but in a three-piece Yoruba traditional agbadawith his trademark Awo cap to match. Governor Fayemiwent straight to a small cluster of people sitting at a table for some handshakes. They looked like the family on whose shoulder the financial burden of the merrymaking that was taking place rested. One of them led him to the musicians’ corner and the governor was handed the microphone. “I am happy that our father saw the completion of the road he had asked me to do when our party came to power before he passed on,” he said among other things. The people cheered. One of the pillars of the community, and most probably one of the governor’s staunch supporters in the town had slept in the Lord. After his brief speech the governor tried a few dance steps when the music resumed, singing his praises and accomplishments. But Jide Awe, the state chairman whispered into the governor’s ear. He probably reminded him that dancing was not part of his talents or that we must get moving as there’re grounds to cover in the day’s campaign, or both. In less than 20 minutes we were on our way out of town. And in a twinkling of an eye, Iropora-Ekiti “waved” at us with its frail-looking“Goodbye from Iropora-Ekiti” metal sign at the edge of the town.

Igbemo-Ekiti, by all accounts still a rural setting, is considered one of the major towns in Ekiti State. As a major town, it has its own fair share of upwardly mobile young ‘professionals’ with their own  ubiquitous “Okada” motorbikes and “Keke NAPEP” tricycles with which they eke out their daily living. For a politician, the “fishing expedition” in a town like Igbemo-Ekiti with its fairly large population of voters cannot be left to chance. It was therefore not surprising to see joy written on Governor KayodeFayemi’s face and his party stakeholders, knowing that their chances of victory was further enhanced and assured when some big “fish” willingly and voluntarily swam into their pool for life more abundant for themselves, their supporters and the generality of the people.

On arrival, the governor, now transformed in appearance, went straight to the town’s monarch for the usual homage. And as expected of traditional rulers to be above partisan politics, at least not to be overt as to their political leanings as they’re considered to be the father of their respective domains, the monarch prayed for candidate Fayemi and emphasized a peaceful atmosphere on the day of election. He had a few nice words to say about the Fayemi administration in an indirect, diplomatic way. The governor in turn thanked the monarch for expressing satisfaction on his administration and promised to do more if voted into power again.

There were multiple dancing troupes at the campaign at Igbemo-Ekiti. They seemed lost in their own different world of musical drama. As usual, key party chieftains took turns to address the crowd. Otunba Niyi Adebayo, former governor of Ekiti State, in his speech scored himself high for being a successful head hunter for discovering Kayode Fayemi. He castigated Opeyemi Bamidele, the Labour Party governorship candidate for being too “impatient and over-ambitious.” He asked the people whether or not they’re satisfied with the governor’s performance to deserve another four years in office, to which the unanimous chorus was “Ko Duro Soke.” The high-point of the campaign was when the state chairman announced the “big catch” of the day. It was the defection of Hon. Olatubosun, a PDP chieftain and former Commissioner for Information under the Segun Oni administration and his supporters. In his speech, Hon. Olatubosun, an indigene of the town, thanked God for having shown him the way to the light which he claimed the APC represents from the eternal darkness and damnation that has always been the lot of the PDP. The crowd roared in approval. The area teachers also stood up to be counted, so to speak, as Chief Adegbite, the head of their association expressed the area teachers’ support for Governor Fayemi through what he called “unprecedented teachers’ package” in the history of the state. “I can confidently stand here that the teachers association in this area are solidly behind your Excellency in this election. We know that you will do more for us in the next four years,” Chief Adegbite stressed.

Probably because of what the people of Orun-Ekiti thought they did not have in terms of population as compared with Igbemo, they made up with a little drama of their own. They brought out their masquerades, some looking so colourful while others were downright ugly-looking to welcome Governor Fayemi. The people of Orun-Ekiti seemed to have emptied themselves unto the school field to catch a glimpse of their governor. By the time Governor Fayemi began his speech, which admonished and encouraged them to participate in the June 21st election, even the masquerades, known in the Yoruba folklore as spirit beings from the beyond that the children believe can only return to the spirit world at the end of the day, had converged on the field to listen to the governor. A prominent Orun Chief mounted the stage to tell Governor Fayemi that the people would support him just as they voted overwhelmingly for him the last time. The Chief enjoined the people to do the same in the coming election. Jide Awe, the state chairman announced and raised a defector’s hand on the stage. When you see people suddenly running in different directions away from the campaign vicinity, you know the governor and his entourage are on their way out of town.Afao-Ekiti was going to be our next campaign stop.