Featured, Features, NewsKayode Fayemi: A Note From The Campaign Trail (1)

Kayode Fayemi: A Note From The Campaign Trail (1) 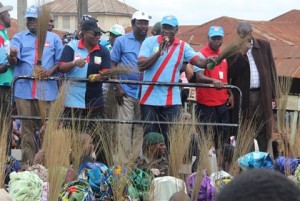 He promptly responded to my text message that informed him I did not see him at the Oluyemi Kayode Stadium, our agreed meeting point, after my arrival at Ado-Ekiti. I was to join the entourage from the stadium for his campaign for re-election, an assignment I took upon myself. “Sorry Femi, I have left the stadium for my campaign. Please wait for me at the office” was his reply. The day was Tuesday, April 29,, 2014. Even though he had already told me over the phone the approximate hour he would be leaving the stadium to hit the road for the day’s campaign in the towns and villages of Ekiti (I arrived two hours late, a tardiness I blamed on the Julius Berger’s portion of the Lagos-Ibadan road construction), I found his somewhat apologetic tone in his text to be psychologically soothing. He’s that governor—although packed with so much power—whose mien disguises who he really is. He comes across as just a regular guy with his simplicity of appearance and his interpersonal communication. But beyond that lie this steely resolve and greatness that seems inevitable, judging from his accomplishments as a chief of state and his intellectual endowment. He is Dr. John Kayode Fayemi, the governor of Ekiti State. “Will do, Your Excellency” was my response. The day of my arrival was the delivery day of “Obirin Kete” at the Ado-Ekiti stadium, a brilliant concept conceived by his better half, Erelu Bisi Adeleye-Fayemi, the First Lady of Ekiti State.

I was on my way to await the governor in his office when it occurred to me that it was not going to be the best idea. I realized that I was walking myself into a voluntary incarceration of which I had no idea when it would end. Waiting for an important personality in Nigeria, not to talk of a governor, more so one who’s out there on a campaign could be like Waiting for Godot. “What if he was so exhausted after the campaign—with its own physical exertion—and just decided to go home?” “Why not ask him where he was so I could join him in order to begin in earnest the work that brought me to Ekiti in the first place?” I ruminated on these thoughts for a few seconds. Convinced that was the best thing to do, I sent him another text about my willingness to join his campaign train “That’s good,” he replied. No sooner than I read his text that his call came in asking me where I was. “I am just walking into your office building, Your Excellency.” “We’re at Aiyekire. That’s where I am campaigning today. You can join me there,” he said in that genteel, guttural voice that makes you feel like he’s your childhood friend.  “Ok, Sir.”

I asked Ayo, my driver in Yoruba how long it would take us to get to Aiyekire. An Ekiti indigene, “Oga, Aiyekire has so many towns. It is a Local Government Area,” he lectured. “Maybe you need to call the governor again and ask him which town we should meet them,” he advised. “Where is the Local Government headquarters?” I asked. “It’s Ode-Ekiti.” “Well, let’s just go there. From there, the people should be able to tell us where the governor is campaigning,” I said, betting with myself that the governor’s campaign would be the only game in any Ekiti town. But most importantly, I was already wary of being a distraction to the governor in the serious business of electioneering. We finally waited for Governor Fayemi and his campaign team at Egbe-Ekiti. It was now late in the afternoon.

Like most towns and villages in Ekiti, Egbe looks aged and tired, judging from the archaic homes that dots the landscape with their corrugated iron roofing. The village looks askance and appears nonchalant to modernity. It sits at a distance from civilization as we know it. One gets the feeling that the village, by its rustic antecedents, may be quite allergic to the revelries often associated with political campaigns. You get the impression that its peace was being intruded upon and its tranquility disturbed.  It’s a village that seems not ready for prime-time, at least not on a short notice. The loud speakers at the campaign venue emitted the maximum decibels that could threaten the foundation of some of the mud houses. The village folks, who seemed to have suspended the everyday chores of their lives, danced back and forth, continually, through the length of the only paved road that runs through the village, in anticipation of the coming of their governor. The songs, seemed especially composed for Governor Fayemi, magnified his many accomplishments in the lives of the people of his state. They were in a state of ecstasy, with their APC Polo or T-shirts, some party supporters were lucky to complete their attires with fez-caps bearing the APC logos or the governor’s pictures. The ones not in party uniforms were mostly community elders, old women and children. They were much brighter with their smiles and traditional attires, sitting patiently to welcome the governor to their domain. As earlier predicted, the campaign was the only big thing in this village.

On arrival, the governor went straight to the palace of the traditional ruler. As it would be observed later in the course of the campaign, this rite of passage is a matter of culture and protocol. The governor and some key party hacks in his entourage must pay the necessary obeisance before politicking. Although a few walking steps from the palace to the campaign arena, it took Governor Fayemi more time to get into the soapbox than the time it took to make his speech, having being swamped by supporters and admirers hailing and singing his praises. After they finally arrived on the stage, the state chairman of All Progressives Party (APC) Chief Jide Awe said a few things to energize the crowd with party slogans and some carefully crafted monikers such as “O wi Bee, O se Bee” (He says it, Does it) and “Ko Duro Soke” (Let him remain up there). A couple of community leaders spoke to remind the people of the need to vote for Governor Fayemi. After all this the governor himself spoke. He appealed to the people for their votes, most of who are already his die-hard supporters and his party. In less than five minutes, the governor was done, having thanked them and enjoined them to come out on the day of election to cast their ballot. “Do not be deceived by the one whose poor performance record you already know. Say no to ‘omo akotileta,’ he instructed.

Aisegba-Ekiti was the next stop. “Ayo, let’s just go back to Ado. I think I will go and wait for the governor in the office after all,” I told my driver. “Why,” he asked. “Nothing,” I replied. But there was something. I skipped the stop at Aisegba-Ekiti for the simple reason that I was afraid somebody was going to ram his vehicle into mine. The driving was just too maddening for my liking. You slowed down for the road bumps and vehicles a few meters behind you suddenly swarmed on you menacingly on both sides forcing their way in your front. “These guys are maniacs,” I suddenly said to myself. “Why are they driving this way when we’re all going to the same place,” I complained to myself. As I later observed, the rear end of the convoy was more chaotic and crazy than the front end. This tail end is where you have a concentration of assorted drivers driving all kinds of assorted people, with no regard to the rules of the road. The police vehicle on this rear section was not different.

Thinking that he may have been too tired after all to show up in his office, Governor Fayemi walked into his office at about 7:15pm. A different kind of work ensured shortly after the governor walked in. Party officials, cabinet members, some corporate suits and everybody in between had one meeting or the other with the governor throughout the night. Among them were his deputy Prof. Modupe Adelabu, the Director-General of his campaign organization Hon. Bimbo Daramola and a few commissioners who brought in some files for the governor. I was finally ushered into the governor’s office at midnight at exactly 12:25 am. “Sorry Femi to have kept you waiting,” he said as we greeted each other with that hard-slapping handshake. “I can understand, Your Excellency,” I replied. “I think you need to go and rest. We will talk tomorrow.” The governor beckoned to the one that ushered me into his office to call someone to arrange my hotel accommodation. “I see you tomorrow, Your Excellency,” I said as I shook his hand again. “I wonder if this governor sleeps in his office sometimes,” I thought to myself as I descended the stairs on the heels of the guy taking me to my hotel. People were still at his outer office past midnight still waiting to see Governor Fayemi.