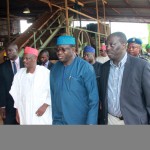 Kano State Governor, Alhaji Musa Kwakwanso has commissioned Ire burnt bricks factory in Ekiti State; saying that Governor Kayode Fayemi’s resuscitation of the factory which has been moribund for more than two decades is a challenge for him to rehabilitate the Kano bricks factory.

The Governor who was also present at the presentation of the State Administration  of Criminal Justice law and the State Magistrate Courts Law said he would take a cue from Ekiti State in resuscitating the Kano Bricks Factory just like the Fayemi administration had done in Ekiti State.

Kwankwanso who is a Presidential aspirant of the All Progressives Congress commended Governor Fayemi for the various initiatives that have transformed the State; saying that his contributions are not limited to Ekiti State but also extend to the nation at large.

“When I was coming here, I told the Governor that I have a similar factory in Kano. If he had mentioned that to me, certainly I would have done something about that factory. I want to tap from how you have done this and implement same in Kano. When I go back, I will see what I can do to bring back my bricks industry as it has been done here. I have also participated in some of the things that were done here, I mean the laws. Certainly I am taking some of them to Kano to see how we can commence the activities under the Ministry of Justice”, he said.

While speaking on his presidential ambition, the Kano State Governor stressed that Nigerians are desirous of change because of the monumental corruption that is happening in the country.

On the sacking of Court in Ekiti State, Kwakwanso expressed dismay at the desperation of politicians; saying that he was expecting the Judiciary to take a firm decision in order to discourage a recurrence of such desecration in any other part if the country.

“I, the people of Kano State and indeed Nigerians were shocked by the level of impunity that we have seen in Ekiti State. I don’t think there was anybody who was expecting this level of impunity even though there have been so many in this country but what happened was so shocking that many people don’t believe that politicians could go to that extend. The level of desperation is so much that people are really concerned about what has happened. I believe that the judiciary will take certain actions that will discourage such action in the future. What we have seen in the country so far is that anything goes. There is no punishment, whatever you do, you get away with it and so forget about it, and some will even say it is will of God. And that is the biggest problem”, he said.

The Lagos State Governor who made the call during the presentation of the Ekiti State Administration of Criminal Justice law (2014) and the State Magistrate Courts Law (2014) said the unprecedented assault on the judiciary in Ekiti State can only  be washed off so that people do not continue to desecrate the court with impunity.

Mr. Fashola while speaking on the two new laws said no society can thrive without laws because they reflect the beliefs and culture of the people.

He stressed that only leaders who care about the people would invest in laws just as the Fayemi-led administration has done because when there is no law, illegality and disorderliness will thrive.

“As Governor Fayemi winds down his 4 year term, certainly hands down some developmental projects to you the people. One can only anticipate that until the last day of this administration, there would be even more developmental initiatives to bequeath to you, the people. But it seems to me that the laws that are being handed over today will perhaps be the most enduring bequeath of the Fayemi administration to the people of Ekiti. This event is coming so soon after an assault on the State judiciary which is unprecedented in Nigeria history and will hopefully will never repeat itself again. It is a huge step that will probably help the land of honour to remake an image it does not deserve. I lend my voice to the call by the honourable Attorney General, the National Judicial Commission to secure the independence of the Judiciary without any delay by acting in the most appropriate manner to allow access to justice in Ekiti and across Nigeria”, he said.

In his remarks on the resuscitation of Ire burnt bricks factory which has been moribund for two decades, Governor Fayemi said his administration had made history by bringing the factory back to life after years of abandonment by many previous government since the old Ondo State.

The Governor said the factory symbolized the revival of industrialization in Ekiti State even as he noted that the factory will supply the brick markets in the Southwest with Oregun brick factory which is out of place.

Fayemi stressed that the factory would not be run by government because it could only be properly and accountably run by private Odua Investment limited and Fountain Holdings.

He expressed optimism that the factory would generate more job opportunities for the people of the State now that it has fully returned to shape.