Former Head of State, General Abdulsalam Abubakar has called on all aggrieved parties in the current security challenges facing the country to embrace dialogue rather than resorting to violence in settling the crisis.

The former Head of State made the call on Wednesday in Ado Ekiti during the inauguration of four projects at the State Teaching Hospital (EKSUTH), and a water project in Erijiyan Ekiti.

Abubakar said dialogue was imperative in the current situation in order to avert the prevalent bloodletting that now characterize the North Eastern part of Nigeria courtesy of the Boko Haram insurgents.

While expressing dismay at the various security challenges that have beset Nigeria, the former Head of State described the insurgency as a cruel war that lacks no moral value and has no respect for the children, women and the innocent citizens.

General Abubakar said: “Never has our country have it so bad in the prevalent bloodletting. A war without any moral cause or respect for the sanctity of life, a war with cruel and brutal rule of engagement who slaughter even children, women and other innocent, defenceless. We should not be looking for victory, solution should be the goal. The government at all levels, the people in and out of the crisis zone, security personnel and all aggrieved parties must listen to ourselves for the sake of our future and our children’s future. I will keep calling on all those aggrieved who have resolved to settle the scores with violence to sheath their swords but we must also look at the issues involved and have the courage to take the needed action promptly and transparently. It must be accepted that dialogue is imperative in the current situation”.

Abubakar who commissioned the School of Nursing administrative block, the hospital library library, EKSUTH out-patient block annex and the Erijiyan Water Treatment Plant, said the determination of the Fayemi-led administration in undertaking the projects is a clear confirmation of the Governor’s love for Ekiti people. 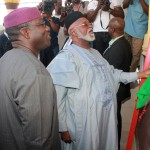 The former Head of State stressed that Fayemi’s act of good governance, equity and justice can hold the promise of restoring the people’s faith in the country.

While lamenting the scourge of water diseases necessitated by lack of pipe borne water in many parts of the country, Abubakar said the Erijiyan water treatment plant would help the people have access to potable water; adding that the projects he has commissioned would be indelible in the hearts of the people.

He said: “Your determination in building this structure in the Nursing school is a clear confirmation of your love for the people of Ekiti State and your zeal has positively affected their lives. Certainly this is people oriented programme of development. For this development, Your Excellency, congratulations. Furthermore, your efforts to create shared prosperity in your State and that of other state governments that have shown commitment to improving the lives of their people is a silver lining in the cloud hovering over our country at this time.”

Speaking on the water project, Governor Fayemi said water had been a major challenge for the people of Erijiyan and Ipole Ilori axis because of the topography.

This he said informed of the need to put up six water treatment plants in certain parts of the States pending when the major dams in the State would be fully functional.

He stressed that the water sector was very crucial to his administration because of the link between water supply and the people’s hygiene.

Fayemi who added that this was why his government invested so much in the dams that are now working stated that the $50 million dollar grant which the World Bank would be giving the State Government would be of immense support to the State in addressing issues of maintenance and laying of new pipes in replacement of the old damaged ones which have hindered many communities from enjoying water supply.