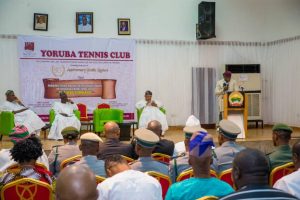 The Governor of Ekiti State, Dr Kayode Fayemi, has stressed the need for the country to adopt a multi-level approach in tackling security challenges, urging government to develop enduring national security policies.
Dr Fayemi, who spoke on Friday at a Public lecture titled “Perspectives on Security Challenges in Nigeria from 1999 to 2019: The Way Forward” organized by the Yoruba Tennis Club in Lagos to mark its 93rd anniversary, said it has become imperative for government to look at other mechanism in addressing insecurity in the country, in addition to military intervention.

Governor Fayemi said government must consider decentralizing security and law enforcement from the federal to state down to the community. He added that partnership in the security sector and inter-agency collaboration must be encouraged to bring about effective policing of both land and coastal regions of the country.

He stated that the police, as the traditional and age-long security outfit, is being relegated to the background, for lack of necessary tools needed to effectively carry out its duties as the friend of the masses. On the other hand, he said the military was being elevated with provision of state-of-the-art facilities and equipment.
The governor called for a reform of the Nigeria Police Force in line with what is obtainable from the criminal justice system by strengthening its capacity to carry out investigations without political interference.
He also said the re-training, re-tooling and re-arming of the Police should be a priority, so that the force to carry out its roles effectively.

According to Fayemi, “From a strategic point of view, it is necessary that the military’s role as an elite specialist weapon of last resort be fastidiously preserved while we leverage other resources and tools that are part of the security sector’s arsenal. This means re-tooling, re-training and re-arming the police force – much neglected in the scheme of security planning and recognizing their premier role in the field of law enforcement and the first line in national security management.

“Effective policing in a democratic environment requires the civilization of the service. The portrait of the Nigeria police officer wielding an assault rifle is an unflattering portrayal that conveys the impression that it is a military unit and entrenches a misconception of identity in the minds of the police operatives themselves.”
“No reform of the police force will be complete without a corresponding wide-ranging reform of our weak criminal justice system. The prosecutors, the judiciary and the correctional institutions are strategic partners with the police service in the law enforcement and security architecture. Thus, for example, strengthening the capacity of the police to carry out investigations will count for very little if the accused can the released from jail for political reasons.”

While calling for cooperation among all the security agencies in the country to totally stamp out insurgency, Dr Fayemi, who is Chairman, Nigeria Governors’ Forum (NGF) explained the advantages of effective policing of both the land borders and coastal waters to forestall activities of infiltrators.
He pointed out that over ten million small arms and light weapons are traceable to West Africa with Nigeria having the largest number. This, he explained accounted largely for the security challenges being experienced in many parts of the country.

Dr Fayemi said: “The proliferation of small arms is partly the concomitant effect of the weakening of states in the post-cold war era. The world has become awash with small arms and light weapons since the collapse of the Soviet Union. Indeed it is estimated that over ten million of such weapons are traced to West Africa according to the Small Arms Survey.
“The region’s most recent crisis has been caused by a convergence of drought, food insecurity, ecological degradation, political instability, conflict and the large number of internally displaced people and refugees. The problem of weak states has permitted a number of non-state actors including gangs, arms dealers, rebel groups, drug dealers and terrorists to flourish in the area.
“Added to this is Nigeria’s extensive and porous borders covering over 4,000 kilometers littered with illegal entry points and routes totaling 1500 points. With the porous borders, criminal gangs and terrorist insurgents easily smuggle weapons into the country which in turn are sold to Niger Delta oil bunkerers, South East kidnappers and other purveyors of violence in the Nigerian state.
“Related to the security of our borders is maritime security. This is not only important in terms of protecting the exploitation of maritime resources, particularly, off-shore oil, but also in terms of securing livelihoods and development. Piracy is a growing phenomenon in our coastal waters and poses a serious threat to security in the sub-region.” He said.
Fayemi posited that security should be taken as everyone’s concern adding that “securing our communities means that infrastructure and urban planning must be guided not only by environmental impact assessment reports but also by security considerations.”

The governor added, “National security now calls for vigilance at every level beginning from individual households to residents and neighbourhood associations. While Close Circuit Television systems will increasingly become fixtures of our towns and cities, the first line of defense against the forces of anarchy will still be ‘human surveillance’ and communal vigilance, an orientation that utilizes citizens as the human intelligence assets of first resort.”
He commended President Mohammadu Buhari for his commitment to government’s plan to collaborate with all relevant stakeholders in addressing various challenges facing the nation thereby bringing unity of purpose towards achieving solutions to our apparently intractable security challenges.
Earlier, the Chairman of the club Arc. Taofeek Agbaje said the 93 year old club was founded for the main purpose of playing Tennis and socialization which has as its major objectives as encouraging all types of sports and promoting education and international relations.

Arc. Agbaje said the club laid much emphasis on honesty, integrity and industry in its members as opinion leaders in the polity and on humanitarian wealth, adding that the elders regularly seek to discuss state and national issues of concern and provide possible solution which are transmitted to states and national leaders.