Featured, NewsIkere-Ekiti Locked Down As Fayemi Calls On Campaign Visit

Ikere-Ekiti Locked Down As Fayemi Calls On Campaign Visit 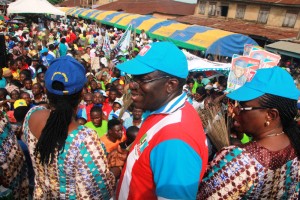 An unprecedented crowd of residents and party supporters welcomed Governor Kayode Fayemi to Ikere-Ekiti on Tuesday when the All Progressives Congress (APC) candidate’s campaign train hit the town.

The Ikere rally was a huge carnival in which indigenes of the town defied the scorching sun and trooped out in their thousands to welcome Fayemi and his entourage amidst singing, dancing, drumming and trumpeting.

The Governor also flagged off the construction of the Ikere Dual Carriageway to commence the dualization of the highway which links the town with the state capital, Ado-Ekiti and Akure, the Ondo State capital.

There were live bands stationed at major junctions in Ikere who thrilled residents many of whom carried placards bearing pro-Fayemi messages, banners with Fayemi’s posters and brooms, the APC party symbol.

Residents of Ikere who are impressed with Fayemi’s performance in office said the governor has done enough to merit a second term in office, promising to give him maximum votes to win re-election.

The Hausa Community in Shasha located on the outskirts of Ikere also endorsed Fayemi’s candidature, promising to cast their votes in favour of the APC standard-bearer in the June 21 election.

The governor also visited residents of Obasanjo Estate at Fagbohun along Ikere-Ado Road where he solicited their votes. The residents assured Fayemi of their support at the governorship poll.

Residents of the estate led by Mr. Jide Ogunluyi laid requests for perimeter fencing, pipe-borne water and rehabilitation of the one kilometer road within the estate before the governor who advised them to direct the requests to the Office of Chairman,Ikere Local Government Council who he said would execute the projects with dispatch.

As Fayemi headed for Ikere township shortly after soliciting votes in Shasha, the journey to the Ogooga’s palace which should have taken ten minutes spanned about two-and-half hours, as party officials, members and party supporters lined the road, causing gridlock along the dual Carriageway.

On sighting the Governor’s convoy, the Hausas chanted various slogans including “Fayemi Tazarce” which means ” Fayemi continue in office”, “Ko Duro S’oke (Stay on Top), among others.

At Shasha, Hausa traders at the Fagbohun  Market led by Alhaji Adamu Imam hailed Fayemi for building a primary school and extension of electricity in the community.

Imam explained that Fayemi has identified with the Hausa community by providing facilities in their community and giving their association a brand new bus which has become a source of pride to them in their native lands.

The community leader described the APC as the party they love so dearly, adding that Fayemi is the only candidate they trust as the governor, and according to them, has lived up to expectation and fulfilled his promises.

In his response, Fayemi described the Hausas as important stakeholders and contributors to the Ekiti economy through their payment of taxes and commitment to peace in the state.

Fayemi told his hosts that he was in Kano earlier in the week for the APC governors’ meeting, who shared a common dream to make life easier for all Nigerians.

He disclosed that the APC governors would be in Ekiti next week and are expected to visit the Hausa  community during their stay in the state.

The governor thanked the Hausa community in the state for donating a bus and ten motorcycles for his campaign, saying he was touched that the community believes in his cause and shares in his dream to transform the state.

Fayemi added: “This election is not about Fayemi alone. It is the pointer to 2015, so we must not joke with it. We must do everything within our power to mobilize our people in the markets, mosques, on the streets and I believe that God is on our side.

“This is a party of truth, integrity and progress and all of us will be beneficiaries of what our party stands for.”

The Ikere rally which was held at the Post Office Roundabout saw Babade who once served as State PDP Secretary, Commissioner and PDP Zonal Publicity Secretary for Southwest urging the people to vote Fayemi to continue his good works.

“We don’t want a governor who will be detaining Obas inside the booth, who disrespects elders, who mismanages resources. We want a cool-headed person as our governor.

Addressing the mammoth crowd, Fayemi expressed gratitude for the people of the town for their massive support and solidarity, urging them to come out en masse and vote APC for the good works to continue.

Describing Ikere as the gateway to Ekiti land, Fayemi said the commencement of work on dual Carriageway underlines the importance attached to the town by his administration.

He urged the people of the community not to be intimidated by the opposition’s threat that Ekiti election results will be declared from Abuja, saying such a step won’t work in Ekiti.

“Some people are threatening that they will be declared as governor from Abuja, tell them that will not happen here. On election day, be vigilant and stand by your votes.

“You have seen what we have done, payment of stipends to the aged, construction of roads, renovation of schools, we have not increased fees in our institutions.