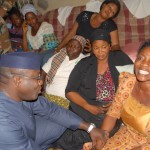 Ekiti State Governor, Dr Kayode Fayemi with the widows of the slain former chairman of NURTW, Omolafe Aderiye, Kehinde (left) and Funmilayo (right) and other family members when the governor paid a condolence visit to the residence of the late drivers’ union leader in Ado-Ekiti

Ekiti State Governor, Dr Kayode Fayemi has told Nigerians to hold Mr. Ayo Fayose, the State Governor-elect, liable for the current crisis in the State; saying that the State has been relatively peace until Fayose’s attack on judges and disruption of court proceedings during the week.

The Governor raised this alarm while assessing the level of damage done by hoodlums who burned down the State and Ado Local Government secretariats of the All Progressives Congress (APC), the residence and five vehicles belonging to the former Chairman of the Road Transport Employees Association of Nigeria, Mr Joseph Olambiwonu (Mentilo), and several other vehicles that were attacked at the wake of the killing on Thursday night of  Mr Omolafe Aderiye, former chairman of the National Union of Road Transport Workers (NURTW).

Other properties destroyed by the arsonists include Fayemi’s campaign office, five APC  vehicles, no fewer than 8 tricycles popularly called Keke Fayemi and some other vehicles on the streets of Ado Ekiti, the State capital.

Dr. Fayemi who lamented that some people did not care about returning the State to its dark old days between 2003 and 2006 in their desperate bid to actualise their ambitions, asserted that the crisis was fuelled by Fayose and should be held responsible for all that happened during this crisis.

The Governor while advising the Governor-elect to toe the path of civility, rather than brigandage in resolving disagreements said Fayose should have sought redress if there was any court pronouncement he was not satisfied with.

Fayemi stressed that the same Court Fayose was afraid of had more than twice ruled against the State Government under the present administration.

“Don’t let us forget where this originally came from. It is not accidental that we have criminal elements going round, burning properties without prompting. This is not unconnected to what happened to the judiciary, the assault on the judiciary, the attack on the judges and the unfortunate death of Mr Omolafe Aderiye, the former Chairman of NURTW.

“All of these are still being investigated but there was one cause: Ayo Fayose should be solely and primarily held responsible for is happening in the State. Mr. Ayo Fayose can deny as much as he likes, I have it on incontrovertible authority, I knew what happened in the court. I am the chief security officer of the State so I should know that he was the one who first rough handled Justice Adeyeye before his thugs had the gut to tear the suit of the judge and then beat him up. Everybody knows his antecedents so if that’s what he wants to bring back to Ekiti, we all owe it a duty as citizens of Ekiti State not to let that happen.

“There are civilized ways of dealing with disagreements, court rulings and court judgements. Ekiti state judiciary has ruled against this government in the past, not once or twice. I did not say because I am the governor say that the Chief Judge should be sacked or beaten up and that the Judges who made such pronouncement against Ekiti State should be battered or beaten up by supporters of our government or officials of our government. There are processes, if you have disagreement with a ruling or judgement, since you have submitted yourself to the processes of the court and you have allowed representation in the court, you appeal the process. It is the right thing to do”, he said.

While disclosing that his decision on June 22 after the result of the governorship election was announced was to avoid a situation where the State will be pushed into avoidable crisis, the Governor called on Fayose to wait till October 16 when he will be sworn in before parading himself in a manner that shows disrespect for the rule of law.

“This was precisely what I was avoiding on June 22nd and that’s why peace has reigned supreme in the state. We all know who the losers would be if all political leaders resort to extra legal means in resolving the problems they have with one another. We cannot allow this state to degenerate into an anarchical society. What we have gained in four years, we do not want to lose it overnight. And I want to appeal to my brother, the Governor elect, he has his date with history, October 16 will be here soon, let him wait and conduct himself with decorum, with decency and with honour. He doesn’t need brigandage, criminality and the things he engages in all the time”, he asserted.

Fayemi urged President Goodluck Jonathan to begin his promised commitment to security at the United Nations summit by prevailing on Fayose before the Governor-elect turns Ekiti State to a crisis-ridden State.

He also urged all concerned authorities to advise Fayose to stop his flagrant disrespect of the law and be law abiding.

In a related development, Governor Fayemi has paid a condolence visit to the family of the former chairman of the National Union of Road Transport Workers (NURTW), Mr Omolafe Aderiye who was killed on Thursday by unknown gunmen in Ado Ekiti.

Fayemi who was earlier advised by some security aides to defer his visit to the family late transport union leader insisted that he had to see Aderiye’s family because the late driver was also one of his citizens until he was killed.

The Governor who was received by Aderiye’s two wives, Kehinde and Funmilayo as well as some of the deceased’s children consoled the family and assured that the perpetrators of the heinous act would not go scot free even as security men are already carrying out their investigations.

“Those who are responsible for burning houses, vehicles and killing an innocent soul, I believe the maximum weight of the law will be brought on them. The investigations are on and will ultimately yield dividends. Enough of this waste of lives in Ekiti. If I am a thug, Ekiti wouldn’t have experienced peace in the last four years of my administration. It is not that I don’t know the politics of bitterness but I was not trained to do such. There’s no way I can wish ill to my neighbour, how much more someone who is close to me?”, Fayemi said.