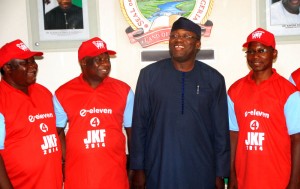 A socio-economic group made up of thoroughbred Ekiti indigenes, E-eleven, has endorsed the Governor of Ekiti State, Dr Kayode Fayemi for re-election ahead of the June 21 gubernatorial election in the State.
The group, led by its chairman, Mr Femi Ajiniran on a visit to the Governor Thursday evening, said they had keenly followed the activities of the Dr Fayemi administration since 2010 in order to ascertain whether the Governor would keep to the promises he made to the people of the State
in his 8-point transformation agenda.

Ajiniran stressed that the assessment of the group showed that the Governor has performed creditably well in all the 8 areas which his administration set out to address.
The Chairman while speaking for the group said that the E-eleven discovered that Fayemi has not been influenced by money or the power which his office carries to make him abuse the people he governs; stressing that he has governed the State with panache  and good character befitting of the governor of the land of honour.
“We have decided we will review your activities in the last few years viz a viz your 8-point agenda for the state. On each of the items, we found that you have done us proud and we are indeed happy. There were lots of factors we considered. Character was one of them. Some would get to the office and change. You are still the old Dr Kayode Fayemi that we used to know. You have not changed. We know money can change people. Time does change people and power can change people. All these have not changed you a bit so we are indeed proud of you”, Ajiniran said.

The group unanimously declared their support for the governor to be re-elected saying that this is the only way for the Ekiti State which all and sundry will be proud of can be birthed.
Responding, Governor Fayemi said he is committed to serving the people of the State by offering quality and trustworthy leadership service
which upcoming generation can be proud of.
The Governor who alongside former Governor Segun Oni belong to the group asserted that he has not abandoned the philosophy and ethos of
the group which have been a guiding principle for him to serve the people without deceit.
Fayemi said the endorsement will spur him on to rededicate himself and move forward to add more value to the lives of the people of the State
while also restoring honour to governance in the State.