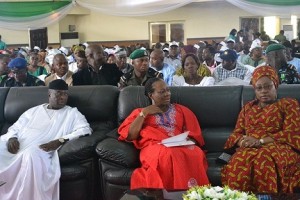 Those who fought for the creation of Ekiti State have been assured by Governor Kayode Fayemi that there will be reward for their efforts.

Governor Fayemi, who spoke on Monday through his deputy, Prof Modupe Adelabu, at a Symposium organized at the Adetiloye Hall, Trade Fair Complex, on Iyin Road, said the founding fathers are to be immortalized by the state government.

The symposium which was organized to mark the 17 anniversary of the creation of Ekiti State had five of the founders and two representatives as speakers. The five members of the Committee on the Creation of Ekiti State shared their experiences with the audience while the Aribasoye Adeoye and Miss Asere Folakemi spoke on their future expectations of the 17-year-old state.

Among the audience at the crowded hall were: Governor Fayemi’s wife, Bisi, the Head of Service (HOS), Mr. Bunmi Famosaya, House of Assembly Speaker Adewale Omirin; the Commissioner for Arts, Culture and Tourism, Chief Ronke Okusanya, her counterpart in the Ministry of Women Affairs and Gender Empowerement, Mrs. Fola Richie-Adewusi, top government functionaries and other stakeholders in the Land of Honour State.

The chairman of Ekiti Council of Traditional Rulers, Oba Adamo Babalola, the Onitaji of Itaji-Ekit led other royal fathers, including the Alaaye of Efon Alaaye-Ekiti, Oba Emmanuel Aladejare, to the occasion.

Governor Fayemi lauded the pains and victimization endured by members of the state creation committee before Ekiti was created on October 1, 1996 by the administration of former military Head of State, the late Gen. Sani Abacha.

Urging the committee not to see its efforts as unappreciated, the governor told the members that plans are afoot to etch their names in the memory of the present and unborn generations.

According to him, the symposium was organized not only to mark the anniversary but also to celebrate those who sacrificed their comforts and contributed immensely for the creation of the state some 17 years ago.

He said the implementation of the roadmap to Ekiti recovery as contained in the Eight-Point Agenda of his administration was in line with the vision of the founding fathers, promising enlist the state in club of developed states before the expiration of his tenure in office.

Fayemi said the fact that the recently released results of the Senior Secondary School (SSS3) examinations adjudged Ekiti State as the best in the country justified the investment of his administration in Education.

Besides, the governor said the government was embarking on massive infrastructural upgrade to attract investment in tourism, agriculture and other areas that would jump-start the state economy and make it viable.

The governor told his guests that his administration has been able to deliver on its electoral promises despite the pittance being received from the Federation Account as monthly allocation, noting that Ekiti draws 35th on the federal allocation table.