Features, NewsFEATURES:Scenes from the Countryside 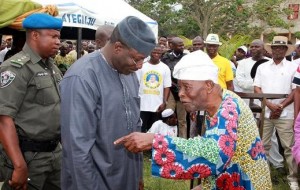 EVERY visit fascinates me. The flashback to my days as a kid growing up in the town.

We used to come here to pluck cherry mangoes. We carefully chose our timing. We would go when it rained. Then, the big men and their domestic workers would be nestling in their beds, away from the biting cold that was usually reinforced by the wind from the hills. The caged dogs would bark and bark, apparently angered at their inability to pounce on the intruders. We would climb the mango trees, big red ants tearing away at our skin to create some painful reddish wounds – the tell-tale signs of our youthful exuberance. We would endure it all to get our prize, the cherry mango with its unique honey-like taste.

But the visit this time to Okebareke in Ado-Ekiti is not to pluck mangoes. There are no barking dogs; nobody screaming to drive away intruders and no mango trees with those alluring yellowish fruits. There are still some teak, shedding their large leaves, but the big stream, Isinla, is no more visible, having been forced to recede by forces of modernity. Gone also is the massive prison yard. It has been pulled down. From its ruins a cultural centre is set to rise.

Between the hills overlooking the colonial District’s Officer’s office and the old prison yard sits Osuntokun Lodge, the modest bungalow that is the Government House. I have an appointment to see Dr John Kayode Fayemi, former alter boy, activist, scholar and politician whose guiding principle is integrity; integrity as a tool to rescue a society plunged into a murky well of reptiles by the very people who swore to care for her. The governor of Ekiti State has asked me to join him on a trip to Isan, his hometown for the Isan Day ceremony and another social engagement involving a professional colleague of mine.

Besides, history is in the making in nearby Iye-Ekiti where a king is taking the staff of office.

The four-car convoy rolls out of the Government House quietly onto the major road that leads to Iworoko. The road is a work- in- progress, lying there as a vivid testimony to the profligacy – wickedness and foolishness, many insist – of the recent past. It was abandoned after the contractor had collected more than N1billion to turn it into a four-lane broad way befitting a state capital. He returned to the job after threats from the government, which stated clearly that it was not going to be business-as-usual. Now, the work is 70 per cent done. A long stretch of it is lit at night. It is bright and colourful – and romantic – making night driving a pleasant experience.

It is all dusty. A rock has been blasted. A long line of drainage has been dug and red earth excavated. A narrow bridge that used to be the nemesis of careless drivers has been replaced by a wide one.

But this, as I later found out, is one of the numerous roads that have been either smoothened or rebuilt and expanded – walkways, flower beds and all that – by the Fayemi Administration. Besides, the construction sites are not limited to the state capital. In every town and village, earth moving machines are roaring.

From one town to the other, there are buildings wearing fire – red roofs and light yellow paints that captivate the eyes. They are the newly renovated schools over which old and current students as well as residents are excited. As of the last count, 180 of such schools that suffered years of neglect had been revived; the first phase of a massive programme to make the environment conducive to learning. New paints. New furniture. New flooring. And students exposed to the use of computers. But teachers are kicking against an aptitude test with which the government would like to prove that education is not all about infrastructure, that the human element is also important.

As we move on from the heart of Iworoko to the outskirts, one is confronted by the majesty of nature. Thick, green forests and exotic birds flapping their fluffy wings, flying across the road. On both sides of the road are forests of big trees that will surely make a timber dealer’s day. The trees stand erect on rows and rows of undulating hills. Vehicles go slowly here, rocking from one side to the other to avoid the holes dug by the road builder’s caterpillars. Besides, there are risky bends that test a driver’s patience and skill.

In every town and village, youths storm the roadside, raising their hands and hailing: Baba o! The old ones, many of them beneficiaries of the novel Social Security scheme under which they are paid N5,000 monthly, simply wave and smile.

There is the picture of a governor who craves no attention – no siren, no long convoy, and no motorcycle outriders as we had in those days – yet his presence is gripping, going by this open show of deep affection.

Iye-Ekiti, home of elder statesman Ayo Fasanmi, is a small agrarian town in Ilejemeje Local Government Area. But there is no farming on this day. Residents have dropped all other things to witness history – the presentation of the staff of office to Oba Jonathan Agboola Adeleye-Oni, the Oniye, by Dr Fayemi.

The applause that greets the governor’s arrival seems a profound expression of gratitude – for the approval of the would-be king to mount the throne and the infrastructural development of the area. Coronation Committee chair J.W. Ogunyemi speaks of “the good road from Oye through Iye to Otun and the beautification of our grammar school as well as the construction of a very standard and modern bridge of Ero along Iye/Ewu/Ayetoro road”. The crowd applauds.

Oba Adeleye-Oni, who graduated from the Lagos State University in 2008, studied Public Administration. He was in the United States from where he was recalled for the royal office.

Fayemi delivers a short speech, acknowledging the people’s support for his administration and promising to do more for them. As the king takes the staff, the symbol of his kingship and authority, the crowd yells: Kabiyesi o! Thus ends a long and tedious process of selecting a king.

A few minutes away in Isan, Fayemi’s hometown, the town’s day is in full swing. Youths are dancing. Women are singing songs that highlight the culture of the town, the home of clay pots. Many of such pots depicting the rich artistic history – and industry – of the people are on display.

Bade Gboyega, a chief and president of the Isan-Ekiti Progressive Union, delivers his address, praising the people for the peace that exists in the town and recommending dialogue to resolve all issues. The youth, he urges, should be patient. “The governor is one of you, but he alone can’t do it,” he says and lists some of the desires of the town. Tarred roads linking some neighbouring towns, a university, a farm settlement, street lamps, a skill acquisition centre and a microfinance bank.

Fayemi reels off his administration’s achievements, thanks the people for their support and promises to do more. His audience, including the traditional ruler, Oba Sunday Owolabi Ajiboye, local government chiefs and senior government officials, seem to agree. They applaud.

They clap and shout: “Four plus four? Eight!”

The group of women sing the praise of the governor’s wife, Erelu Bisi Fayemi, who is decked out in a smart traditional attire of iro and buba, her dreadlocks covered with a cap of beads – the symbol of her traditional title. She is all smiles.

A political meeting is set to begin. Off goes Fayemi and this reporter is left with Erelu and a woman visitor.

“For how long have you had your dreadlocks?” the woman asks Mrs Fayemi. “For five years,” she replies. “They look so good and natural; well tended.” “Thank you ma.”

“But, why did you do it? Were you tired of visiting the salon?” Mrs Fayemi smiles. “Not really. I just felt that the attempt by many women to make their hair look European is just not right. I like my natural hair.”

The discussion moves from hair care to serious issues, such as women’s rights, poverty alleviation and governance. A woman and her child show up at the gate. She comes all the way from Ikere-Ekiti to see the Erelu for financial assistance to tackle her diabetes. “These are the things we see every time,” says Erelu, a rights activist and compassionate woman, who seems to be happy that awareness of gender issues and human rights is rising.

But, to her, it is surprising that she is seen as the unseen hand behind every attempt to get justice for victims of abuses, such as rape and battery. “This is not true; it’s just that people are getting more interested in rights issues,” she says.

All is quiet on the way back to Ado-Ekiti. Fayemi speaks of his dream to lighten up the road – all the way from the capital. He is obviously impressed by the beauty of the skyline and the new road as the street lamps beam from their long poles, creating a glimmering effect on the dark asphalt.

In the morning, a short ride around the capital unveils a town in a hurry to cast off the remaining vestiges of its rustic apparel for full modernity. A group of Chinese men are sweating it out at the Civic Centre to which the old prison yard – its eerie air of morbidity and hopelessness – has finally yielded ground. Now, residents and visitors will soon come here for revelries and academic exertions – as the case may be. There is a library. A museum is there, perhaps to house the relics of the old prison yard. In the plan is a shopping arcade. A big hall that can accommodate 1000 people will be part of the centre. There will be others in which between 100 and 250 guests can sit.

The pavilion will free the Oluyemi Kayode Stadium, which is named after the late Ado-Ekiti born frontline sprinter, from other activities, such as the Independent Day and NYSC Passing Out parades. It has a capacity for 20,000 people, sitting comfortably in covered areas.

But the Civic Centre and the pavilion are just two of a group the Fayemi Administration has christened the Legacy Projects. Right there atop the hill that used to house the colonial District Officer (DO) will sit the new Government House, which is designed to be a beautiful edifice that will be a vivid exhibition of some architectural expertise. The builders are leaving nothing to chance in a desperate attempt to meet the December deadline. Some of the surrounding buildings are already up, seducing the eyes of passersby on the major road down below. The new structure, which will be overlooking the town from its imperial height, I am told, will be, arguably, the best of its type in the country.

Fayemi smiles and asks the contractor: “Are we still okay for the December deadline?” “O yes; we’ll meet up,” the man replies, adding: “These are the difficult parts. Setting the blocks is easy: it’ll be fast.”

The builder explains it all, stating how functional the rising edifice will be, why a pillar must come up here and a beam must be forged there. But the new Government House is not just another building. It is a striking parody of the state of the state. Ekiti is restless in its determination to become a fully developed modern state with a functional transportation system, good roads, huge water works, well-equipped hospitals, security and all. As a corollary of these, the state will become a seductive bride to the private sector, which will come in to set up factories. The economy will develop and there will be jobs for the youth.