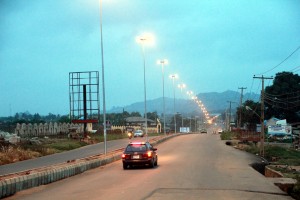 This is not the same Ekiti I visited about three years ago. I cannot believe what I saw when I came into Ado – all the roads – the completely different look of the town and the beauty at night. In fact, this is magic. And I’m bold to say that, the Governor, Dr. Kayode Fayemi, na magician!

That was the expression of popular musician, John Odafe Asiemo, a.k.a Daddy Showkey during a recent visit to Ado Ekiti.

The Galala exponent was in Ilorin. He was to leave for Lagos, but however made a stop-over in Ado to see an old friend. He stayed two nights in the state capital. According to him, “I couldn’t believe what I saw when I entered into Ekiti; the streets light was a surprise to me. E just be like say, na Lagos I dey!

Like Daddy Showkey, the song on the lips of visitors, indigenes, all and sundry in the state today is the ‘magic’ that has happened in the state capital – the unprecedented transformation that has taken place in past two years.

Clearly, one aspect of the action point of the state government that has whao-ed everyone is the illumination of the state capital and the turn-around engendered in the lives of the people.

An evening around the state capital can only be described as awesome and a great sight to behold. The first picture of beauty was seen at Adebayo Road in 2012 with the flag off of the street light. Today, Ajilosun, Ojumose, Post Office are wonders at night. The brightness of these streets is alluring and very attractive. Most of the dark spots in these places have vanished.

At 10.00pm, it’s like daytime at Ajilosun, Okeyinmi, Ojumose, Fajuyi Park through to Adebayo, food sellers, petty traders are at the roadsides. Business of buying and selling is in top gear. There is free movement of residents. Lovebirds could be seen walking, holding hands, chatting away in ecstasy.

“This is Ekiti wonder! Though, I’m from Delta State and I live in Lagos, what I’ve seen here is amazing. In fact, I will help to tell other Ekiti indigenes that Governor Fayemi is working. I will call my Ekiti friends in Lagos and abroad to come back home and also contribute their quota to the development of their state. They say seeing is believing. I’ve seen it all. And I’m so happy at what I saw. I will discuss with my friend here about the possibility of coming to invest in Ekiti,” Daddy Showkey confessed.

Infrastructural development is the second key on the 8-Point Agenda of the Fayemi administration. Today no one is left in doubt about the transformation that has occurred in the state.

There’s no gainsaying also that the social and infrastructural programme of the state government has impacted a lot at improving the lives of the people and also attracted investment.

Unlike in the past, there has been a drastic change in night life in the state capital. The lull and sleepy condition has disappeared paving way for an ever bubbling and bustling environment. New fun spots have sprouted in some places while moribund ones have woken up to the innovative scene.

Apart from the noticeable flow of fun-seekers at the popular Fajuyi Park, night crawlers now have safe haven at places such as the Queens Court, La Gracia, Bobby Hotel, School 2 are also popular arena where fun seeking residents could be found every evening. A new rendezvous called the Melting Point is also another exciting venue amongst others in the state capital.

However, the jolly, the merry in old places such as Mobil petrol station, De Godfather Executive, Aso Rock, Club De Royale has continued even at a higher pace.

Gbenga Ayoola, a resident of the town who was at Melting Point at Adebayo area noted that, there has been a drastic change in night life in Ado. “Things appear different now, from what it used to be before the Fayemi administration. These days, we can all see the difference”.

Ayoola said construction of lights in major streets in the state capital was an initiative that has not only facilitated illumination of the town but also helped to curb the spate of armed robbery attacks, killings and other vices in the town”. Our people no longer live in fear; security of lives and property is now guaranteed”.

He further explained that movement around the fast growing town in the evenings and at night has become very easy and hitch free. He was of the view that all the dark spots and hide out of miscreants in places such as Ojumose, Okeyinmi, old Garage have vanished completely.

Mr. Kayode Afolabi, boss of the fun spot, Melting Point said, “the idea was aimed not only at having an entertainment spot, but to grab the investment opportunity available and contribute to the economic growth of the state through the business initiative.

“The economic atmosphere in Ekiti right now appears very favourable for investors and I feel it is good to grab the opportunity as soon as possible. We were able to identify this and we tapped into it. This project apart from helping to boost the social and infrastructural development of the state has also provided employment for some young people,” Afolabi said.

He was quick to add that the fun spot unlike some others in the town does not permit miscreants and suspicious clients. “Ours is classy and upscale in standard. Our clients also fall within the same standard. This has allowed for strict adherence to our rules”.

Afolabi advised that indigenes of Ekiti and interested investors residents in other states and abroad should take advantage of the new business and investment opportunities in Ekiti with a view to assisting Governor Kayode Fayemi’s administration in the social, economic and infrastructural growth of the state.