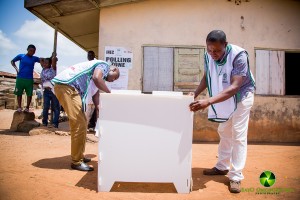 The crusading cleric and columnist, Gabriel Akinnadewo, in his book, “Here comes the Commander-in-Chief” said: “Since the end of the Nigerian Civil War in 1970, Nigeria has fought many wars. Yes, wars because election in this country is war. We fought in 1979, 1983, 1993, 1999, 2003 and 2007. Another one is coming in 2011…” That was the setting when Akinnadewo wrote his piece and he could not have been more pin-point accurate and apt.

But the Saturday, June 21, 2014 gubernatorial election in Ekiti did not tally with the above Akinnadewo template and fear perhaps due to the heavy and asphyxiating militarization of the event where less than one million people came out to cast their vote for the various political gladiators.

I have enjoyed the privilege of covering/witnessing all manner of elections in Nigeria, starting with that of 1983 and I make bold to say that the June 21, 2014 election in Ekiti that produced Mr. Peter Ayodele Fayose as the new Chief Executive Officer of the state in a rancour-free election is distinguishingly different in many ways.

I had expressed the opinion in an article published in The Nation sometimes in March that the June and August gubernatorial elections in Ekiti and Osun states respectively will be the barometer with which to measure the preparedness of the police, the Independent National Electoral Commission (INEC) and indeed all stakeholders for the 2015 general elections on which politicians have been dissipating prodigious energy and bounteous resources since 2012 instead of focusing on the massively distractive challenges facing the country.

With the Ekiti experience, the heavy deployment of military and police that bore their fangs in case of any eventuality notwithstanding, it can be seen that the agencies responsible for elections in the country are indeed ready and prepared for the 2015 general elections. But then, will the government be able to deploy the same quantum of security personnel it deployed to Ekiti for the election to all states of the federation at the same time during the 2015 general elections?

The Ekiti gubernatorial election, as adumbrated above, was different in many ways: even though there were some skirmishes during the campaigns, the bulk of the campaigns was media-based with the airwaves bombarded with all manners of political messages designed to sway the minds of the electorate and of course their votes in favour of the different contestants depending on who the architects of such messages were.

Let us move away from the messages and now to the election proper. Even though there was a chocking military and police presence before, during and after the election, the election was largely peaceful, devoid of the usual state of anarchy in a country where elections are seen and conducted as wars and characterised by gory carnage where people often lose lives, limbs and means of livelihood as well as billions of Naira in ambulatory and non- ambulatory property.

The three major contenders, the sitting governor, Dr. Kayode Fayemi, the Governor-elect, Mr. Ayodele Fayose and two-term Commissioner in Lagos State, Mr. Opeyemi Bamidele were unanimous in confirming that the election was not only peaceful with a large turnout, it was equally devoid of rigging. The only major complaints by the All Progressives Congress (APC) were the heavy militarization which it argued scared away many voters and the arrest of some of its leaders and members shortly before and on election day.

But in novel twist that heralds a new dawn in Ekiti and portrays the Governor-elect as a father of all, a fence mender and a bridge builder in consonance with his campaign that he is now “born again”, Fayose has pledged to ensure the release of all those arrested shortly and during the election.

That things have changed this time around became manifest when in less than 24 hours after INEC declared Fayose victorious, Fayemi, the gallant loser, a true democrat and the hero of the election, hit the airwaves in a broadcast to concede  victory and to equally congratulate the winner, saying “we have to consider the interest of Ekiti people”.

He added: “…As an elected official, I have no choice than to respect the wishes of the people. Our democracy is fragile and we have to do whatever we can as leaders to strengthen and deepen it the more. Ekiti is also unique. We all have ties dating back to centuries, so we are not disagreeable in any way.

“…We wanted to take from the same basket. But today, we have taken the outcome with equanimity. So, I congratulate the governor-elect because what we are doing today is a lesson for us that in whatever we do as leaders, we have to consider the overall interest of Ekiti people. Today, Ekiti is victorious. We have shown the world that politics can be played with decorum and restraint”.

Responding, Fayose, who referred to Fayemi as “our leader” showered encomiums on Fayemi for his unusual and un-Nigerian attribute of readily conceding, which he described as the hallmark of a true statesman and a veritable avenue for the in-coming government to build upon what the Fayemi administration had done in the state.

His words: “Dr. Fayemi has demonstrated commitment to peace and I am going to complement his efforts. I am going to take it from wherever he stops and make sure that immediately after office, he still continues to enjoy his rights and benefits of a leader that has served his own people”.

Fayemi deserves to be commended for his timeous act of statesmanship and sportsmanship of congratulating Fayose for his electoral victory. By this singular act, he has not only demonstrated that he is indeed a man of honour and that he is not desperate to remain in office as governor. He has equally shown that he is a man of peace who all Ekitis will continually be proud of, for it is only a true democrat and a statesman that will readily concede victory rather than turning the state into another theatre of war with the attendant gory carnage, burning, maiming and killing as well as wanton destruction of both ambulatory and non-ambulatory property similar to the events of 1983 when 76 houses were damaged in Ado-Ekiti in one day after the gubernatorial election.

An apostle of politics of restraint and decorum, Fayemi has thus become the second person to willingly congratulate the winner of an election he contested after Alhaji Ibrahim Kwakwanso of Kano State did same 11 years ago.  Fayemi’s name will go down in history as a lover of peace and also a lover of the people he had toiled to serve most assiduously in the last four years. With his action, indeed a new dawn of electoral maturity has begun in Ekiti land.

The governor-elect also deserves to be commended for accepting the olive branch Fayemi extended to him and particularly for urging his supporters to shun any act that could jeopardise the peace of the state and for him to use his God-ordained and God-given position as the next Governor of Ekiti State to get close to the Centre and secure enough of Federal Government presence in Ekiti this time around.

He earns the commendation of Ekitis for the on-going cooperation between him and Fayemi and their preparedness, as statesmen, to do all in their powers to move the state forward. His readiness to build on the foundation laid by the Fayemi administration in the state is heart-warming and this will imbue him with the benefit of well-meaning Ekitis working together with him regardless of their different political beliefs in order to achieve the vision of the founding fathers of Ekiti.

This article was first published in The Guardian on Tuesday, July 01, 2014.