FEATURES: How Fayemi Said Thank You To Ekiti People 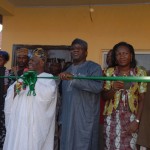 In a short while, Governor Kayode Fayemi of Ekiti State would become a former governor and he has ensured that he would leave the state in a blaze of glory. On September 19, a plan of the administration’s exit route was revealed by a committee headed by the governor’s Chief of Staff, Mr Yemi Adaramodu. The Adaramodu-led Media and Publicity committee of the fourth anniversary celebration, revealed that the governor would, among other things, tour the state on a thank you visit to all the 16 local government areas and the 19 local council development areas the government created a few months ago. He explained that the purpose of the tour was “to appreciate the people of the state for their unalloyed support for the government in the last four years.”

On the occasion, Adaramodu also announced that various dignitaries and eminent Nigerians would be in the state not only to celebrate with Dr Fayemi for the successful completion of his four years in office, but to also inaugurate numerous projects completed by his administration.

He said “as an indication that the governor has met the yearnings of Ekiti people based on the eight-point agenda of the present government, a total of about 50 projects spread across the 35 council areas would be commissioned to mark the anniversary.”

Adaramodu also said the fourth anniversary celebration which had the theme: “Celebrating a Legacy of Honour and Service,” was predicated on the belief that “the outgoing government was a purposeful administration that has fulfilled the mandate given to it by the people.” According to him, “the present government has surpassed the preceding governments in the areas of incentives and general welfare of civil servants and the public primary and secondary teachers.”

Further to the foundation for the celebration, Adaramodu added: “Ekiti today is now investment haven, a tourist destination of choice, the toast of development partners and a reference point in good and responsive governance because we have confronted headlong the critical questions of development and stagnation.

“We therefore  salute our people for their cooperation. It is also gratifying to note that the sacrifice of the early years has paid off as we all can boast of a better state where we have peace, progress and prosperity.”

Governor Fayemi and various dignitaries have been inaugurating projects since the commencement of the fourth anniversary/winding down activities. He commenced his thank you tour with a visit to Ilejemeje Local Government Area, but suspended it when he was not well-received in Emure Local Government Area, coupled with the crisis that broke out in the state on Monday, September 22.

The setback and skirmishes notwithstanding, Governor Fayemi continued with activities to mark the end of his tenure, and they have been ongoing since their formal commencement Nigeria’s Independence Day on October 1. On that day, former Head of State, General Muhammadu Buhari, was the guest of honour. Buhari on the 2014 Independence anniversary of the country inaugurated the Ekiti Parapo Square, a 12,000-seater pavillion designed to host various state and private events.

Speaking on the occasion of the inauguration of the Ekiti Parapo Square which was built through the N20 billion bond taken by the state government, Buhari expressed delight at being asked to perform the inauguration and congratulated Fayemi for the edifice  he said was a testimony to the good governance enjoyed by the people of the state under Fayemi. The occasion had also coincided with the 18th anniversary of the creation of Ekiti State, as well as the 2014 Ekiti State Merit Award, where Ekiti-born Africa’s youngest Ph.D holder in Mathematics, Oluwadara Olaoluwa; Africa’s best junior table tennis player, Tosin Oribamise and 29 others were awarded the 2014 Ekiti State Merit Award.

Governor Fayemi in his speech at the ceremony had reiterated the need for all and sundry to embrace peace, saying that “economic and academic endeavours can only thrive in an  atmosphere of peace and tranquillity. He noted that this was attested to by the World Bank’s ‘Doing Business’ index which puts Ekiti as one of the four Nigerian states that have made “the most progress and stood out for introducing several high impact reforms that narrowed down the gap to best practices the most.”

Fayemi further stressed the need for all Ekiti indigenes to unite and take ownership of the Ekiti project so that the state can continue to have a “pool of achievers worthy of the state, national and global recognition.”

The October 1 activities were soon followed by the inauguration some other projects in the state capital, Ado Ekiti. Soon after the visit of Buhari, another presidential aspirant in the party, former Vice President, Atiku Abubakar, also visited the state as a guest of honour. Alhaji Abubakar inaugurated the 300-bed Oba Adejugbe General Hospital in Ado Ekiti as part of activities for the fourth anniversary celebration.

It was then the turn of projects at the Ekiti State University (EKSU) and Governor Fayemi led some other dignitaries to the event. Among the projects Governor Fayemi formally opened for use in the university were the Pharmacology/ Biochemistry building;  medical students hostels and a two-kilometre road. For the EKSU projects ceremony, Rivers State governor, Mr Rotimi Amaechi, was the special guest of honour. The governor came as part of activities marking the fourth anniversary of the Dr Kayode Fayemi administration.

General Abubakar also commissioned the Ekiti State Teaching Hospital (EKSUTH) Library, the Works Department and the General Out-Patient Department of the teaching hospital, as well as the administrative building of the School of Nursing and Midwifery, Ado-Ekiti.

Then came Governors Babatunde Fashola and Rabiu Musa Kwakwanso of Lagos and Kano states respectively. They took on different assignments in the activities marking the fourth anniversary of Fayemi’s government and its winding down. While Kwankwaso opened the Ire Burnt Brick factory in Ire-Ekiti in Oye Local Government Area, Fashola performed the presentation of the State Administration of Criminal Justice law and the State Magistrate Courts Law.

Fashola observed on the occasion that “as Governor Fayemi winds down his four-year term, he certainly hands down some developmental projects to you the people.”

On Sunday, the administration held a fourth anniversary thanksgiving mass at St. Patrick’s Catholic Cathedral in Ado Ekiti. The programme for the day included the official opening of the new government house at Ayoba Hill in Ado Ekiti by Nobel laureate, Professor Wole Soyinka and the Speaker of the House of Representatives, Alhaji Aminu Waziri Tambuwal.

Earlier on Friday, a special Jumat thanksgiving service had been held at the Ansar-ur deen mosque in the state capital.

Even as his tenure ends Thursday, Governor Fayemi has restated his commitment to the peace and development of the state both in and out of office. He thanked Ekiti indigenes for the support given to his government since he assumed office in October 2010.

“I am here to show gratitude for standing by my administration, and for your prayers for us. I want you to know that whether I am in government or not, the peace of Ekiti State and it progress and all that will make cooperation reign among the people are important to me. And I will never at any time relent in pursuing peace for the state.”

The life of the Fayemi administration was summed up thus: “All that this administration has done in the last four years had been envisioned. They are all contained in the inaugural speech of Governor Fayemi during his inauguration on October 16, 2010. Within four years, our administration has been able through self denial, perseverance and prudent management of scarce resources turn around a seemingly hopeless situation for better.”

This article was first published in The Nigerian Tribune on 14, October 2014.