FEATURES: For Ekiti Indigent Elderly, A New Lease Of Life 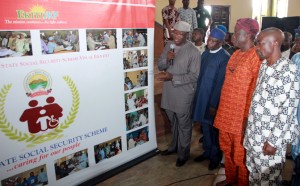 To relieve the burden of poverty on its senior citizens, the Ekiti State government has instituted a social security scheme that ensures the payment of a monthly stipend to its needy elderly. SULAIMON OLANREWAJU, who witnessed the second anniversary of the implementation of the scheme, reports.

Elizabeth Olojede must have been a head turner in her younger days. At 76, she still has traces of beauty despite the deep lines that crisscross her face. Although in the twilight of her years, she carries herself with a measure of poise and prestige. However, a combination of old age and vicissitudes of life has done her in.

According to her, her life took a downward turn three years ago after a motorbike accident left her incapacitated and unable to continue with her vegetable selling business.

Consequently, folks turned away from the former head turner as she was left to her fate and became a victim of the elements. She had a firsthand experience of hardship and deprivation since she had no means of taking care of herself, her children being too poor to offer any form of succour. So, the old woman had to rely on the sparse and sporadic goodwill of the people around her as a means of sustenance. According to the septuagenarian, there were days when she went without food. This took its toll on her health as she became very weak and sick.

She continued with her story, “Two years ago, things changed for me when our governor started giving us N5,000 monthly. Now, I feed and take care of my basic needs.”

“To somebody of means the N5,000 may be nothing, but it means a lot to me because but for it, I have nothing. I take care of myself with it; I buy medicine that I need to be fit from the money. So, it means quite a lot to me. I appreciate what the governor has done and I pray for him daily.”

Pa Olatunji James Ajiboye’s story is similar to that of Mama Olojede. Born in 1928 at Oke Iloro, Oke Imesi, he trained as a tailor in his younger years and sojourned in Lagos for many years where he practised his trade before returning to his hometown five years ago.

But on his return home, he had hunger, regret, pains and lack as companions.

“Since I returned home, I have not been doing anything because of old age. I have been living at the mercy of the people,” the 85-year old man volunteered.

Asked why his children were not taking care of him, he said, “I don’t have many children. I would probably have died if not for the intervention of the state governor because I had absolutely nothing to live on. Since I was put on the scheme last year, things have become better for me. Now, I have a means of keeping body and soul together.”

Ekiti State, like all other states in the country, has a number of old people who are destitute. But unlike what obtains in many other states, the poor elderly in Ekiti have not been left to their fate as the state government has instituted a social security scheme to help as many of them as possible out of their misery and poverty.

The scheme, which was instituted in 2011, is designed to ameliorate the challenges facing the aged on the last lap of their earthly sojourn through the provision of a fixed monthly stipend for them. The scheme, which started with 20,000 people, currently accommodates 25,000 old people.Speaking on the occasion of the second anniversary of the implementation of the social security scheme in Ado Ekiti last Friday, Dr Kayode Fayemi, Ekiti State governor, said, “The idea of a monthly allowance for the elderly in our state was borne out of a strategic engagement that tackles poverty on multiple levels in the effort to make it history in Ekiti State. In the manifesto through which I sought the mandate of our people as governor, I promised to deliver on people-focused policies that would banish poverty from Ekiti, as have been clearly articulated in our 8-Point Agenda, one of the practical manifestations of which is the social security programme.  I am aware that the war against poverty is not one that can be effectively waged using a single weapon or plan, due to the fact that poverty evolves from a variety of factors of differing depths and complexity. Our intention has not only been to identify the various causes and instances of poverty in our land, but to proffer durable antidotes to them.”

The governor, who described the scheme as the first of its kind, not only in Nigeria but also in the West African sub-region, said, “it will continue to provide succour and a fairly decent means of livelihood for our elderly citizens throughout old age. And some of the indicators of the impact of this programme have revealed a steady decline in the elderly mortality rate in our state till date.”

The governor assured the beneficiaries of the scheme that it had come to stay in the state as “the legislation entrenching this is already part of the laws of Ekiti State,” adding that about N1.7billion had been expended on the scheme.

Regretting that some people had been impersonating the beneficiaries to collect the monthly stipends on behalf of those who, on account of ill-health, could not make it to the payment centres, the governor said the state government had resolved to introduce a more scientific payment process that would involve the use of a biometric data capturing system that would eliminate the activities of ghost beneficiaries.

He, however, added that the government had decided that a designated payment team would do home payment to beneficiaries who are too old or too ill to make it to the payment centres upon the presentation of their identity cards.

Dr Fayemi also added that the government had perfected plan to set up food banks in the 16 local government areas of the state with a view to providing poor old people raw food. He also disclosed that as a way of ensuring that the destitute elderly have access to good meal on a daily basis, the government had concluded plans to set up a soup kitchen in the three senatorial districts in the state. The food soup kitchen is to provide one hot meal to them daily.

The governor also stated that “as a further step towards providing for the elderly who have no other source of welfare, our administration is in the process of setting up an old peoples’ home to cater for the well-being of those who face extreme challenges at old age.”

In a speech delivered by the Commissioner for Labour, Productivity and Human Capital Development, Mr. Oluwole Ariyo, he said in the traditional society there used to be a mechanism for taking care of the needs of the elderly. He, however, noted that “In modern societies, because of the so called civilization, which has altered the mode of production and distribution, has destroyed these old natural stabilizers in human relationship and thus thrown up inequalities, robbing people of their dignity and lowering standards of living for the majority of the people.”

The commissioner observed that the scheme “has opened up a greater access to good food and medication. It has reduced drastically the level of poverty among the beneficiaries.”

Speaking on the criteria for the selection of beneficiaries, Senior Special Assistant to the governor on Social Security, Mr Dipo Ogunleye, said the scheme was meant for people who are at least 65 years of age.

He added that, “However, it is not every 65 year old in the state that is qualified to be enrolled on the scheme; it is only for those who are poor and have no one to take care of them. It is for those who are really in need of it.”

But it was not just a day for talks as the old people were later treated to a sumptuous meal by the state government. It was also an opportunity for people to display their dancing skills as both the governor and the beneficiaries danced to indigenous Ekiti music.

However, in the midst of the merriment, a man, 73-year-old Olu Ademokoya of Iye Ekiti in Ilejemeje Local Government Area, was clearly far from being happy. He looked despondent and dejected; obviously immune to the air of jollity around him.

In response to this, Ogunleye said the state government would love to put every poor old person in the state on the scheme if not for paucity of fund. “But what I can say is that the governor has gradually been increasing the number of beneficiaries and I am sure that it is a matter of time before every eligible old person is put on the scheme.”

This article was first published in The Nigerian Tribune