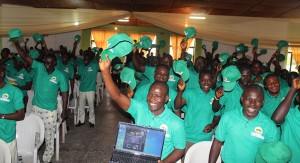 Food security for citizens has become a big challenge to governments at levels as the issue has always defied solutions proffered to it in a bid to ensure that citizens are well-fed.

It is generally believed that agriculture has been abandoned since the discovery of crude oil and has been left to suffer untold neglect with successive governments paying lip service to the resuscitation of the sector.
The agriculture sector which used to be the mainstay of the nation’s economy also gave employment to millions of Nigerians. Its serial neglect has contributed in no small measure to the scourge of unemployment ravaging the country.

Youths who supposed to be engaged in agricultural activities have migrated in large numbers to the urban centres in search of white collar jobs leaving the old people who depend on simple farming implements with the task of providing food and cash crops for the nation.
But Ekiti State is taking the lead in reversing the trend with the Governor, Dr. Kayode Fayemi, introducing the Youth Commercial Agriculture Development (Y-CAD) to positively engage youths in large scale agricultural activities purely on commercial basis.

Dr. Fayemi, who has ‘modernizing agriculture’ as the third component of his administration’s eight-point agenda, has always emphasized that agriculture remains a key factor in efforts to turn around the fortunes of the state.
He expressed dismay that Ekiti which used to lead in cocoa production  in the past has lost its position due to the fact that most of the farmers who are old depend on basic farming implements.

The Y-CAD scheme is highly mechanized as tractors and other modern equipment were purchased for that purpose.

The move was aimed at ensuring that agriculture contributes 50 per cent of the state’s Internally Generated revenue (IGR), by making agricultural practices more attractive to the youths of the state.
Through this, the government intends to provide a major shift from ageing subsistent farming to vibrant youth-based commercial farming.

However, the emphasis on youth involvement does not mean that the aged farming population will be abandoned as adequate provision has been made for them in the agric agenda of his regime.

When the Y-CAD programme was launched on April 29, 2012, the Minister of Agriculture, Dr. Akinwumi Adesina, commended Dr. Fayemi for the initiative which he said would help Ekiti exploit its rich agricultural resources and depend less on the accruals from the Federation Account.
A total number of 1,500 beneficiaries were mobilized for the first phase of Y-CAD thereby reducing the number of unemployed youths in the state.

The minister urged other states to emulate Ekiti in using agriculture to reduce unemployment.

Barely one year and four months after it was launched at the Orin-Ekiti Farm Settlement in Ido/Osi Local Government Area of the state, Y-CAD has changed the lives of the youths who are involved in the scheme.
The beneficiaries who are full of praises for the vision of Governor Fayemi in giving them economic empowerment through agriculture spoke on the progress they are making and how some of them have become employers of labour.

In Igede-Ile Ona, there is a nursery belonging to one of the Y-CAD participants, Ayodeji Owoeye, a graduate of Biochemistry from the Lagos State University (LASU) who keyed into the YCAD programme after years of joblessness.
Now, just within the space of seven months, the young man can now boast of 10,000 oil palm seedlings, 20,000 cocoa seedlings and 20, 000 teak seedlings being sold to different customers.
Owoeye urged the State Government to extend the programme to more youths considering how his own life is fast changing as a result of his recruitment into the Y-CAD scheme.

At Efon-Alaaye in Efon Local Government Area, Y-CAD has empowered eight young men and a woman to set up a fish pond which they intend to use to contribute meaningfully to the economy of the state.

Five of them, Ojo Olajide, a graduate of Mining Engineering; Adejumo Adesegun, Accounts graduate; Austin Olalekan, Education Management graduate; Otunlape Amos, Economics graduate and Olajide Adeola, who studied fishery at EKSU; are sitting atop 30,000 table size fresh fish and planning to have a greater capacity in the next cycle.

They explained that their interest in fishery has been boosted by the Y-CAD scheme expressing confidence that the future is indeed bright with the Y-CAD platform.

Another beneficiary, Zoki Benjamin, is cultivating more than 50 hectares of rice plantation in Ikoro-Ekiti in Ijero Local Government Area.
Zoki said he was doing great and now has the privilege to sponsor his child’s education in one of the best private schools around.

His colleague at Ikoro, Omotosho Adebayo, who also sits atop about six hectares of rice plantation, showered encomiums on Dr. Fayemi for using the Y-CAD platform to transform his life.
“This is the first time in the history of Ekiti State that youths are being given solid empowerment rather than the lip service paid by the successive administrations.

“When we heard of the scheme, we all thought that it was one of the gimmicks being used to deceive people. We enlisted and were trained and today, we have every reason to thank God for giving us Governor Fayemi whose dream has now become a reality.
“I have become the owner of my business with this rice plantation and my long search for white-collar jobs has ended and my life has now been transformed”, Adebayo explained.

At Erifun, on the outskirts of Ado-Ekiti, the state capital, one of the Y-CAD beneficiaries, Alowolodu Ademola, now has 9,000 birds in his poultry, courtesy of the government intervention.
These success stories are replicated by other Y-CAD participants scattered all over Ekiti State and engaged in various forms of agricultural activities to boost food security and production of cash crops to widen the income base of the state.

Y-CAD beneficiaries were selected through a thorough screening process in different fields of agriculture, including aquaculture, livestock, arable farming, and so on.

They were trained, then provided with input, incentives and loans to start off. The youths are expected to return the loans over time and then take possession of the business but with continued incentives from the government.
Arowosafe noted that Y-CAD is a step by the Fayemi administration to promote agriculture and enhance youth empowerment in the state.

He said, “The programme is aimed at engaging serious-minded youths with entrepreneur spirit to be engaged to become successful business players in the future.
With the impact of the Y-CAD scheme being felt in many homes, communities and local government areas of the state, it is a matter of time before Ekiti becomes the Food Basket of the Nation.

Governor Fayemi has succeeded in reinventing agriculture and using the sector to empower the youths and make them to be self-sustaining and self-reliant.

Agriculture which had suffered untold neglect in the past is already taking its pride of place in Ekiti and the wealth of the state will soon become manifest as Y-CAD grows in leaps and bounds in years to come.