FEATURES: Fayemi: Governing with the People 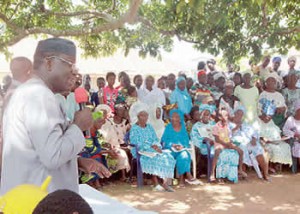 Dr Kayode Fayemi, Ekiti State governor, says he wants ‘to do government with the people’ rather than ‘do government to the people.’  This informed the town hall meetings he had with different communities to collate their needs for inclusion in the 2014 appropriation. SULAIMON OLANREWAJU, who witnessed some of the meetings, reports.

Development in Africa is stunted as a result of the exclusion of the beneficiaries of developmental efforts from the four key stages of a project viz; research, design, implementation and evaluation. Because leaders have arrogated to themselves the powers to think and decide for the masses, there has failed to be a concurrence between the people’s expectations and the provisions made by those in power.

Determined to change the trend in Ekiti State, the governor, Kayode Fayemi, last year embarked on a programme to involve the people in taking decisions that would affect how they live. Apart from issues such as education, roads and health on which the government decides on behalf of the people, the state government panders to the wishes of the populace by allowing them to decide on the projects they would want in their communities. The government then incorporates in the budget the projects it could while providing funds to the communities to execute on their own those that could not be accommodated in the budget.

Ahead of the preparation of the 2014 budget, the governor recently held town hall meetings with different communities in the state. Explaining the rationale for the meetings, Dr Fayemi said that government should be about the masses who yearn for development; hence the importance his administration has attached to the opinions of the grassroots about their needs.

The importance of the governor’s position played out during his visit to some of the communities where he learnt that some schools only had the headmistress, her assistant and a teacher as teaching staff. He was also told that teaching in some schools was done by youth corps members sequel to inadequacy of teaching staff.

Fayemi, however, assured that the situation would be immediately visited to enable the schools have more teaching staff.

Also reacting on some communities’ plea for deployment of teachers to schools in the affected communities, the governor warned teachers against influencing postings to rural areas but urged them to accept the postings and benefit from the rural teacher posting allowance paid to teachers serving in rural areas.

On the first day of the tour, the governor held town hall meetings in communities such as; Ilasa, Ikun Oba, Araromi Oke, Eda Ile, Kota Ekiti, Omuo Oke, Ayegunle-Ahan, Isinbode and Omuo Ekiti, where the leaders of the communities presented their areas of priorities to the governor for inclusion in the 2014 appropriation.

Speaking during the meetings at Ekiti East Local Government, Fayemi said the meeting was imperative so as to feel the people’s pulse, get their inputs for the preparation of the 2014 appropriation bill and inspect community projects.

Fayemi, who inaugurated some projects including a civic centre, a block of health workers’ quarters and a community viewing centre at Ikun-Oba, Eda Ile and Araromi-Oke respectively, also inspected some self-help projects for which the state government recently disbursed N600 million as grants-in-aid to the communities.

The governor, while responding to the various requests of the communities which ranged from autonomy to other basic amenities, assured them of the inclusion of many of the requests in the budgeting process.

Responding to request made by Araromi-Ugbeshi for autonomy, the governor urged the leaders of the community to follow due process by approaching the Council of Traditional Rulers in the state, a body which is empowered to make recommendations to the governor before autonomy is granted.

On the request of some communities for road network, Fayemi assured that many new roads would be constructed while existing ones that are yet to be completed would be completed as soon as possible.

He stressed that his administration would leave no stone unturned in achieving its target of making all parts of the state accessible by motorable roads by 2014.

There was a heavy traffic congestion as youths, market women, transport unions and other community members trooped out to welcome the governor at Fagbohun end of Ikere, and ushered him to the town, in convoy of vehicles and motorcycles.

The projects inaugurated included 10 units of lock up shops at Afao Ikere, two new health centres at Kajola and Ogabodi, two new halls at the Ogoga palace and a newly constructed skills acquisition centre at the School for the Blind, Ikere.

The town hall meeting was preceded by a courtesy call on the paramount ruler of the town, Oba Adegoke Adegboye who tabled the community’s requests which include the dualisation of Ikere-Akure road to the state’s boundary, the reconstruction of Ikere-Ilawe road, Ikere-Ijan road, and Ikere-Ijare road leading to Ondo State.

The Oba added that the community lacked pipe borne water as the people depend on an MDG motorized bore-hole while also lamenting the neglect of the construction of Ogbese Dam by the Federal Government.

Other requests by the community leader are the construction of a modern market, resuscitation of Ikere Quarry and a fire service station.

Responding to the requests, Fayemi reiterated his commitment to fulfilling the promises he made concerning the projects being done in the communities; stressing that “our word is our bond”.

He stated that enumeration work had begun on the proposed dualisation of Ikere-Akure road, and the state government had approached the Federal Government for approval to construct the road, adding that efforts were in top gear to finalise agreement on the construction.

On water, he explained that his government was working to revive the EU water project in Afao-Ikere so that it could serve the need of the community pending when ongoing work on the water sector would be completed.

He assured that his administration had not reneged on its promise to build a modern market in the community but explained that the original site for the proposed market is small and may require the demolition of nearby buildings to free up space for the market; adding that government had decided to jettison demolition and therefore decided to relocate the market from Oju Oja to Odo Osun area of the town.

During his meeting with 13 communities in Ikole Local Government Area, Fayemi said his pact with the people was to “do government with them and not do government to them”, hence the need for their inputs in how they are governed. He added that it was inappropriate for a governor to just sit down in the state capital and decides what he feels the people need while the people’s needs may actually be at variance with the governor’s perspective.

A huge crowd welcomed the governor to Iyemero Community, where the spokesperson, Mr Moses Osasona, said the community was once described as a ‘remote area’ and suffered infrastructural neglect by successive governments but the administration of Dr Fayemi had brought it to a new dawn.

“Iyemero Ekiti people had suffered infrastructural neglect by successive governments but you stood up and ensured that Iyemero people are now enjoying infrastructural development. On this occasion, we cannot but make specific reference to those things that the Fayemi’s three year tenure has given birth to in Iyemero which include electrification of Iyemero powered by a brand new transformer, which the people of the community have been denied for many years”, he said.

The governor inaugurated seven projects during the meetings. These included a police station at Ijesa-isu, community information centre at Ilamo, a health centre at Otunja, blocks of classrooms and examination hall at Odo Oro, and the installation of a 200KVA transformer at Oke Ayedun, among others.

They expressed their appreciation for the sincerity demonstrated by the government adding that those things they asked for in the 2012 edition of the town hall meetings had already been completed or about being completed.

This article was first published in Nigerian Tribune