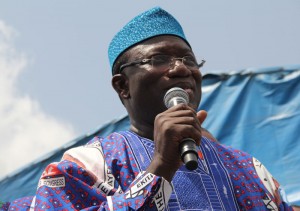 We will repay Fayemi with our votes come June 21, 2014, and no Jupiter will succeed in manipulating our victory

Today, we conclude the trilogy on the above topic and from the outset, let us emphasise that the manner of former governor Ayo Fayose’s emergence as PDP’s governorship candidate in the forthcoming governorship election in Ekiti has clearly demonstrated the Jonathan mindset. It is one that will rig elections, even a national one and say, so what? Here is a president who has severally been described as a snake and therefore capable of committing the most heinous democratic coup without batting an eyelid, still believing he could not be linked to it; a skilful falconer. He is doing this not knowing the reverberations can completely evaporate his 2015 ambitions. Even if the PDP could so contemptuously brush aside the interests of its remaining 12 contestants who each paid N11 Million, I think it behoves President Jonathan to have thought of the larger picture, the consequences for self and country especially for a man claiming to lead a transformational government. Had he done that, he would have realised that Ekiti has gone far past his candidate in the full knowledge that former governor Ayo Fayose has a past, writ large, in the state. It is a past so bad some people reading this will believe my days are numbered. In the instant case though, there are no fears, as Ayo is my own brother. Unfortunately, Jonathan and his party’s attraction to him is exactly that past of unmitigated mayhem. It is what they see as the only answer to Fayemi’s intimidating record as governor. For them, therefore, the other 12 contestants are what you will describe as disposables.

But the truth is, and I can see it a mile away, Fayose is being used in this macabre dance to test run 2015. I will explain. The way he was egregiously announced over and above the others, in a take-it-or- leave-it audacity now reportedly ratified by the party’s National Working Committee, is a perfect picture of how the president intends to use the INEC not only in the two 2014 governorship elections in Yoruba land, but also at the presidential election come 2015. They think nothing of failure and if there happens to be a crisis , especially arising from manipulating the 2015 election, the fallback position will be to encourage the South- South to secede with Jonathan, the snake, claiming he has no hands in it as he would not have, otherwise, convoked his diversionary national conference. They see it as a win-win situation. Well, I do not know what could happen at the national level, but his minders got it massively wrong in the Southwest.

In 1966, the Northern Peoples’ Congress (NPC)-controlled federal government, after ravaging the Western Region, giving it a sole administrator of its own description, was about unleashing the entire Nigerian Army on it when the bubble burst. That story would repeat itself in ’83 and ‘93 with dire consequences for the country. I have no idea how old the president’s current anchormen were in 1965 -66 but the history of that carnage in the entire Western Nigeria, but especially in Lagos, is written in indelible ink for those who have ears. One other thing driving their plot is the fact that, at the instance of a Senator Omisore and his likes in the Senate, that distinguished chamber, at a time Omisore was going to contest the Osun governorship election, enacted that governorship appeals would now terminate at the Supreme Court . With that in mind, they believe that INEC only has to declare their wish and the rest will be history as the case could go on, literally, for a life time. They need be told that if any of the elections in Ekiti or Osun is rigged – please note there is a conditional precedent – then the Americans may have missed their 2015 apocalyptic date for Nigeria by several months.

The history of the Yoruba goes back thousands of years. We were never, as a corporate whole, slaves to any group, small or big and no Kashamu, for whatever personal profits, can haul us into any modern day servitude to Jonathan even when an Obasanjo now counts for nothing with him. If six decades down the line, Awo fed us on education, nobody, especially from the Avatar’s neck of wood, will now come and haul Yoruba into any kind of modern day slavery. We will remain our own masters, deciding our own preferences, making our choices, like it or not. Fortunately for us in Yoruba land, especially in Ekiti and Osun, the ‘soldiers’ Jonathan is pressing into service have such odious history our people can never forget in a hurry, be it Omisore as deputy governor in Osun or Fayose, as governor of Ekiti – a history of blood and mayhem whose gory details I will leave to Yoruba stakeholder groups which must now rise and denounce this millennial plot against the Yoruba nation. In contra-distinction to their ‘soldiers’, those they are trying to oust through foul means in both Ekiti and Osun are exemplars in the true tradition of cultured Yoruba people, men who have worked their hands to the bare bones in the service of our people. They have both rekindled the Awo developmental paradigm and we can no longer be taken back to the 14th century. Dating back to Awo, the Yoruba has a history of development which they appreciate. Short-changed during both the military interregnum and the PDP’s seven years of the locust when every facet of life in the region degraded, the last four years of the APC has been an era of reconstruction and modernisation.

In education, where Fayemi’s first surprise as governor was the state’s unbelievable 29 percentage pass in the preceding WASCE, pass rate last year was above 70 percent. The Youth Commercial Agriculture Programme has seen thousands of our hitherto unemployed young people become gainfully engaged, even as employers of labour themselves. Care of the elderly has been taken to a new level totally unprecedented anywhere in Nigeria. In tourism, Ikogosi, popular only as a rodents’ reservation colony in PDP days, has been completely transformed into a world class tourist centre now being patronised by a minimum 20,000 local and international visitors per month. Ado-Ekiti, the state capital, glows, day and night, just as urban renewal is on-going in other towns. Among other state agencies, the Water Corporation is doing everything possible to increase the water stock in the state so that many more areas can have treated water and given the governor’s leadership style and pedigree, the World Bank is giving substantial assistance to this just as it is doing in education and like so many other development partners currently actively engaged in the state. It is no longer the Ekiti State Ayo Fayose was governor over.

Despite the lies being peddled about by the opposition, teachers remain happy and supportive of a

governor that has done the most for them of any Ekiti governor.

Most local government workers are appreciative of the fact that to continue in employment, the government had, of necessity, to plug the corroding leakages which a tiny few was using to short change the system. Okada riders, recently empowered by the government, can see the difference

between the roads, then and now, as they ply their trade on the new Ekiti road network which must rank among the best in the entire country even if the federal government is deliberating with holding refund of roads done on its behalf with its formal authorisation.

Ekitis are no ingrates. We will repay Fayemi with our votes come June 21, 2014, and no Jupiter will succeed in manipulating our victory. Rather, it is their serpentine ploys, unholy alliances and evil schemes that will collapse like a pack of cards.

This article was first published in The Nation on Sunday, March 30, 2014.