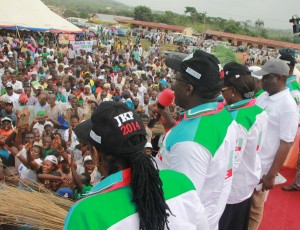 We are not confused. We are very clear about where we have come from, where we are

and where we are headed. When we started this journey, we said it is a collective rescue mission. That is the journey that has brought us this far. We are on the march again and

we are unstoppable. We know that the journey has not reached an end because we have not finished the job. That is why we are in this race. It is to serve our people.” Gov. Kayode Fayemi.

Fifty years ago, back at the prestigious Christ’s School, Ado-Ekiti, the young journalist who covered the unveiling of   ‘Domestic And Foreign Dimensions Of Nigeria’s Politics’, another from Prof. Jide Osuntokun’s  stupendous brain and wordsmithery, would promptly have got me Into ‘imposition’  or even  the far stiffer ‘Detention’ for having the audacity to write that I was the Professor’s ‘friend and classmate’ at The School’. O yes, for a less ‘humongous’ sacrilege as that, or even for no offence at all, you could very well be wacked into any of those two purgatories and should any reason be needed at all, it could be ascribed to something as nebulous as ‘urinating all over the compound’. Boy, that journalist should be careful next time as his ascription should have gone to  Seniors Bode Fadase and Sanmi Ajaja who had come to celebrate one of their own: the  distinguished Prof of History and Diplomat, who belonged with them in the witheringly brilliant class of ‘60’. Sir, I hereby apologise on behalf of the journalist.

It is just as well that we are continuing our celebration of another distinguished alumnus of The School, and  the Executive Governor of Ekiti, Dr Kayode Fayemi, who,  this past week, picked his nomination form as an APC aspirant in Abuja and later arrived Ado- Ekiti to the waiting hands of a tumultuous APC members and, a knowing and appreciative Ekiti citizenry, who would love nothing better than to see Fayemi continue his wizardry of impressive multi-sectoral development of the state. What a huge democrat Hon Opeyemi Bamidele would have been called today if he had waited to be denied the same opportunity of picking that same form before porting to the Labour Party, a mere PDP under party, claiming he was snuffed off  when he never at any time as much as officially informed his ward of his intention to contest on the APC platform.

Without a scintilla of doubt, no single edition of any newspaper in the country today can exhaustively do justice to the multi-sectoral development the Collective Rescue Mission,  spearheaded by Dr Kayode Fayemi, through the  grace of the Almighty God, has accomplished  in the state underpinned, as it were, by his ramifying  8-Point Agenda. I therefore do not have to start repeating his achievements on this half page.  Rather, as was the practice of the column in the pre-rerun election days of 2009, this piece will be dedicated to enlightening the electorate in both Osun and Ekiti states but more specifically Ekiti, where the first of the two governorship elections will come up.  Happily, these are two states which emerged from the old Western Region where the Avatar, Chief Obafemi Awolowo, made the difference more than five decades ago by his strategic investment in education which he provided free of charge to the entire children of the region. The result  is that  today, no governor in any  South-western state  can ask newspaper editors  to publish just about  anything, however  odious  about him and his administration, because  five percent of  his people  can  neither  read nor write. Awo’s trail-blazing  revolution  further ensured  that, today, there is no family  where you would not find at least  one or even more  graduates,  just as it ensured that my small town, Are-Ekiti,  with a population of  about  30, 000,   has produced 10  University professors, three of them from one single family.

I state all these because of the totally pedestrian logic of the PDP and its client parties which informs them that to get votes in the coming elections in either Ekiti or Osun state, all their Abuja suzerain has to do is make kerosene available to our people. The cheek of it is that this is a product  through which they steal daily in billions of naira in the name of  kerosene subsidy  whereas the  Nigerian poor  and their  children  daily line up at filling stations where  kerosene  is bought  at over a N100.00 per litre when available, at all.  PDP will have to go locate its Somalia elsewhere, far, far from Ekiti or Osun.

The electorate in these two states, thanks to education and an innate intelligence, can very easily make a distinction between Ekiti and Osun states of a mere four years ago and today. They remember the days of the locust just as they can see the developments all around them. I think at this point, we should allow Mr Femi Awoniyi, a Germany- based Ekiti Diasporan, give his testimony. Answered Femi to the question:  What changes have you noticed in Ekiti? In an interview published in The Nation of Sunday, March 16, 2014: ‘Many. First, the peace that reigns in the state today is a marked departure from the insecurity that ruled before Fayemi’s coming to power when political violence and urban banditry were pervasive.  For me, a revolutionary feat of the Fayemi administration is the introduction of social security scheme for the elderly. It has greatly helped to alleviate abject poverty in the rural communities. Look at Ikogosi. The place has been completely transformed and it is drawing tourists from all over the country. That is a boost to the state economy. Programmes such as the Youth Commercial Agricultural Development and Youth Volunteer Corps Employment Scheme have taken thousands of our youths away from the streets into productive economic activities.’ He went on and on.

It is therefore the height of the illogic for the PDP to think that as long as they can inundate our streets with soldiers and men of the PDP police, they can scare off educated and intelligent individuals who know, like the palm of their hands, the difference between the PDP seven years of the locust and today when all the Southwest states under the banner of the APC are aggressively pursuing an integrated economic development paradigm for the entire region.

It is important that our people be made very aware of PDP/LABOUR/ACCORD satanic plans for the coming elections so that we will all be on our guard because we will never go back to those harrowing days in ‘Egypt’. One of them is for the president to financially starve the Southwest states even up to a point governors in Ekiti and Osun may not be able to pay salaries. To this end, federal allocations to states had plummeted by about 40 percent in the first quarter of the year whilst states friendly to the president are more than fed from grants from such funds as the ecological fund. Naturally, those of their clients who get away with murder through oil subsidy, pension scam, kerosene subsidy scam etc will all be requested to make huge donations to their war chest. But this is where they will remember we have a saying here, dating back to the First Republic: BO ROWO MI, O RINU MI meaning, ‘yes, you see my hands taking your bribe, but you can’t know my mind.’ Our people must take these monies when offered, indeed, ask for more because they were stolen from all of us in the first place.

This article was first published in The Nation on Sunday, 23 March, 2014